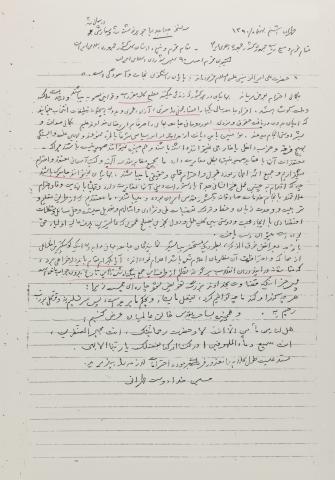 Honourable President of the Islamic Republic of Iran

Esteemed Prosecutor General of the Islamic Republic of Iran

His Holiness Ali, Commander of the Faithful, peace be upon Him, stated, “The outcome of truthfulness is salvation and tranquillity.”

It is respectfully conveyed that in whatever country the Baha’is might live, they are obedient to all regulations and ratified laws, and make utmost efforts to serve the land and the nation. The members of the community elect the members of their Assembly annually in a confidential and free process without any propagation and with general participation. The elected individuals, without receiving any wages or salary, manage the spiritual affairs of the Baha’i community with utmost sincerity, solely for the sake of the Almighty God and love for humanity. The adherents, according to the divine law, are strictly prohibited from interfering in all matters political, and owing to this law, they cannot have any connection with any political party or group, be it domestic or international. They cannot be Zionists, inasmuch as their beliefs majorly differ from the Zionist ideology. We believe in and respect all Divine Manifestations and their Holy Books. We believe and wholeheartedly accept all the Holy Imams. Baha’is cannot be spies, given that such endeavours are inhuman and inconsistent with their religious ordinances. They are, and have always been, sincerely and with utmost faithfulness, willing to serve the sacred nation of Iran. It is our belief that through education and training, one common language and script, elimination of all racial and other prejudices, rectitude of conduct in all the affairs of life, and by finding spiritual solutions to economic problems, and through mutual love and friendship among all nations and governments, humanity can achieve universal peace, which has been the highest desire of all divine Prophets and religions.

Further to the above explanation, as you are well aware, the representatives of the Baha’i community were executed without due process or any evidence of wrongdoing. From which authority should we seek justice? In this period of revolution, unfortunately, every appeal for justice made by this wronged group has remained unanswered. We therefore leave all affairs in the hands of the Almighty God and implore His Divine Justice because:

He doeth as He doeth, and what recourse have we? He carrieth out His Will, He ordaineth what He pleaseth. Then better for thee to bow down thy head in submission, and put thy trust in the All-Merciful Lord.

We also submit to the Threshold of the Creator of mankind saying:

Is there any other refuge for us except Thee? No, verily Thou art the All Merciful God. Thou art the Protector of the perplexed, Thou art He Who listens to the prayer of the afflicted; comprehend us, comprehend us by Thy bounty, O Thou Who art our Most Glorious God.

Asking for your forgiveness for the length of this letter,