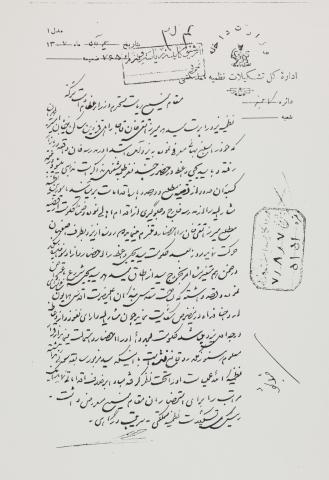 Esteemed Head of Ministers, may [your] greatness continue

The police force of Yazd reports that Mirza Taghi Khan Ghajar, born in Qazvin and residing on Amiriyeh Avenue in Tehran, who has introduced himself as a Baha’i propagator, has come to Yazd. He first went to the Khan School, located in the bazaar, and started having religious discussions with Seyyed Yahya Vaez in the presence of a number of religious students.

As a result, the local tradesmen became aware of the matter and decided to take some action. The police officers took him out of the school and prevented the action of the locals. In addition, the government was informed of the matter. It summoned Mirza Taghi Khan and forced him to leave Yazd for Isfahan within two days.

The next day, the government summoned Seyyed Yahya, the preacher, and called him to account. He got agitated and he was ordered to leave the room. Seyyed Yahya started protesting and had the intention of complaining to His Majesty, the King. Since he is very influential and is one of the top-rated preachers of Yazd, the government summoned him again and apologized to him. Apparently, he is still offended and has not been convinced. Even though the subject Seyyed has no criminal record, the police have been fully monitoring his actions so that he does not take any illegal actions.

We have now conveyed the affairs for Your Excellency’s information.

[Stamp on top of the page]

Archives of the head of the ministers cabinet

[Handwritten number on top of the page] 34

[Stamp on the margin of the page]

[Received by] the head of ministers’ cabinet

[Handwritten note on the margin of the page] to be recorded