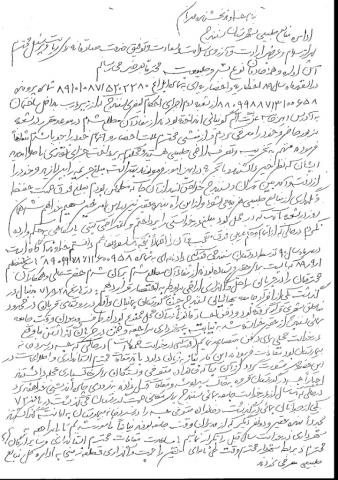 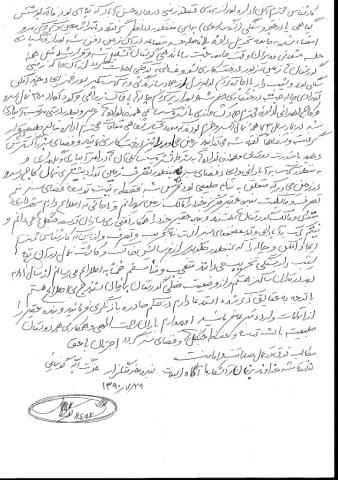 In the Name of God, the Forgiving, the Compassionate

To the Office of Natural Resources in Sanandaj

Expressing my greetings to the respected director and staff of that office and all who are serving humanity and nature, and offering my wishes for your health, happiness and success in services rendered, I bring the following to your kind attention.

In the month of Esfand of 1389 [February/March 2011], I received a notification and writ of summons, numbered 8910108715202280, file number 8809988713100658, issued by Branch 2 of the Office of Enforcement of Penal Orders in Sanandaj, and addressed to me, Ezzatollah Gouniyaie, which had been delivered to my address by being slipped under the door of my home. I was ordered to present myself on a certain date at the branch mentioned in the notification and summons letter. I duly presented myself at the said branch and requested the respected secretary to tell me why I had been summoned and what I had been accused of. I was verbally informed that I had been accused of the unlawful seizure and destruction of land marked for natural resources, and was sentenced to the payment of a fine. Since the secretary viewed me favourably and was also experienced in this area, he suggested that I make life easy for myself by paying the fine instead of having to pursue the case and travel to and from between Tehran and Sanandaj. As I was sure that the money would be used for the preservation and development of our natural resources and I would also be taking part in this beneficial deed, I went to the local bank that very same day and deposited the sum requested without questioning or challenging the court order or the summons verbally or in writing, even though I was not guilty of the charges brought against me nor of the court’s in absentia ruling, believing it was all a misunderstanding—God knows the truth of what I say.

In Mehr 1390 [September/October 2011], I was informed of the contents of a letter notifying me of ruling number 8909978711600958, dated 1 Azar 1389 [22 November 2010], which was sent to me by mail by my friends in Sanandaj. I therefore thought it important to give Your Excellency and your respected colleagues a brief account of the different stages of the transfer of the land in question:

On 28 Azar 1371 [19 December 1992], following the passing of one of the members of the Sanandaj Baha’i community, we were confronted with the dilemma of having to bury his remains in the Baha’i cemetery in the village of Qaryan [Qolyan], and which was situated within the city’s boundaries, where the burial of the deceased was forbidden by law. At the time, I was requested by the then administrators of the Baha’i community of Sanandaj to contact the City Council on their behalf and request a location for the burial of the deceased individual, whilst informing them of the situation (enclosed, please find a photocopy of the request). The municipal council responded that time was needed to process such a request; that the respected authorities in the provincial Governor General’s Office and those in the [Ministry of] Intelligence would have to consult on the matter. In the meantime, the body of the deceased was kept in the hospital’s morgue, and as the family of the deceased had to bury it as soon as possible, it was eventually buried in the cemetery at Qorveh, with the authorities promising to find a solution very soon. In the autumn of 1372 [1993/1994], a year having passed since the request of the Baha’i community of Sanandaj for a cemetery, one of the Baha’i youths passed away and the family of the deceased entrusted the body to the hospital morgue. Once again, this humble servant and two other individuals who were the administrators of the Baha’i community at the time were given the task of going to the city council and renewing the previous application. With the assistance of the respected authorities of the provincial Governor General’s Office and the other offices, the respected mayor of the time referred this servant by letter of introduction to the central headquarters of the Office of Natural Resources in order to be given a piece of land.

After some inspection, the respected land certifier of that office selected a piece of rocky land (sedimentary rock) completely devoid of vegetation on the Hasanabad road. This land was officially mapped out and registered and the signed deed was handed over to the Baha’i community. Immediately afterwards, the body of the deceased was buried there, and after the burial, the community’s then administrators gathered together in consultation to see what should be done to beautify the cemetery. It was decided to follow in the pattern of all cemeteries and plant trees and build a small room where bodies could be washed and prepared for burial. As the land was rocky and sloped, a bulldozer and a compressor were rented from the Ministry of Jihad-i-Sazandegi[1] to prepare the ground and dig deep rows in the ground in order to plant trees. Later on, after these ditches were filled with compost and topsoil, 250 cypress and fir saplings, contributed by the respected Office of Agriculture Jihad, were planted in them with the assistance and cooperation of all the families, and later watered by hand. In the spring of 1373 [1994/1995], all the saplings were thriving and verdant and the cause of much admiration and praise from the respected authorities of the Office of Natural Resources, who also verbally suggested that we could consider planting trees in the land next to the cemetery, thus expanding the green, forested zone.

After consulting on this with all the families and securing their full cooperation in assisting with cultivating and watering the trees as a service to the greening and development of the country and not with the intention of possessing the land, a larger number of cypress and fir saplings were procured and planted in the land adjacent [to the cemetery], which belonged to the Office of Natural Resources. This was undertaken purely with the intention of increasing the green zone and not in order to take possession of any land. This lowly servant has never considered himself the owner of this land, and as far as I know, city councils are the guardians and owners of all cemeteries; also, I consider myself a voluntary assistant of the Organization for the Development of Forests [Forestry Department]. My intention has always been to help with the development and expansion of forested areas, and not to seize or destroy. I am amazed and saddened that the respected surveyor sees the creation of ditches and rows in the ground as being destructive, when they have been dug and constructed in order to guard the saplings, and protect the rocky, sloping land from erosion. I also bring to your attention that I have been residing in Tehran since 1381 [2002/2003] and am not aware of the present situation of the Baha’i cemetery in Sanandaj. In light of the facts hereby presented, I beg you to reconsider the sentence that has been issued, and absolve this lowly servant of the accusations levelled against him. I hope that the abundant showers of God’s mercy and the assistance of all the friends of nature protect and develop the forests and green zones. May you be rewarded by the Almighty.

The above statement has been written in the utmost truthfulness and trustworthiness. God is aware of all that is hidden and all that is manifest.

[1] [Jihad-i-Sazandegi:  Is responsible for animal, fishery and poultry production, as well as forest and pasture management.]

Blocking the entrance of the Baha’i cemetery in Ahvaz

Refusal to burry the body of Mohanna, a 12 year old in Tabriz

Letter from Judiciary expert about the Baha’i cemetery in Ahvaz

Celebrations to mark the birthday of the hidden Imam, organised by Revolutionary Guards in Baha'i Cemetery of Shiraz - June 2014

Pause in enforcing court order on Baha'i cemetery in Darzikola

The Baha’i Cemetery of Ivel has been placed for auction

Baha'i bodies are exhumed by Tehran

Exhumation of bodies is a violation of religious law

Confiscation of Omana company and the Baha’i cemetery

Plot of land for Baha'i cemetary in Chabahar confiscated

Local council banner in Baha'i cemetery of Ardestan, banning burial of the dead in the cemetery - December 2016