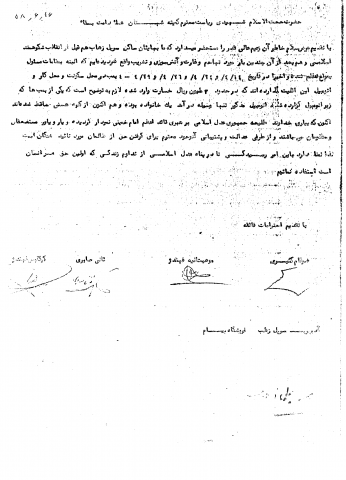 The Honourable Hujjatu'l-Islam Shahidi, the respected head of the Committee of [illegible]

With salutations, we bring to the attention of that great leader that we, the Baha’is of Sarpol-e Zahab

have been several times subject to attacks, looting, [people] ransacking and setting fire to and destroying [our properties], before and after the magnificent Islamic Revolution.  We have of course, pleaded for justice to the responsible authorities. Now again, on the days of 14 Tir, 24 Tir, 26 Tir and 29 Tir, four bombs were placed in the dwellings, workplaces and cars of this minority, which caused the loss of 3 million rials. It is necessary to mention that one of the bombs was planted under a car that was the only source of income of that family. Now they have lost all their possessions.

Now that, with God’s assistance and under the leadership of Imam Khomeini, the dawn of justice has appeared in the Islamic Republic, he is a friend and supporter of the underprivileged and oppressed ones; and on the other hand, fairness and support of that respected person for restoring the rights of [those who have been oppressed by the oppressors], has similarly been approved by everyone, we request that investigations be made into this matter, so that we may continue living under the protection of Islamic Justice, benefitting from the primary rights of every human being.

With our greatest respect: