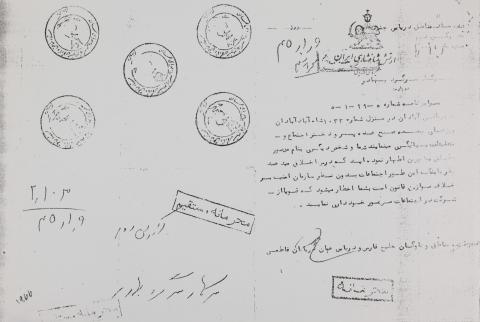 Headquarters of the Southern Maritime Region

According to letter No. 5-1-29-5 from Law Enforcement of Abadan.

On Friday mornings, a group of boys and girls gather at house number 1033 on Shah-Abad, Abadan, and propagate Baha’ism. You and another person, named Mansour Motlagh, have claimed to the officers that you teach moral education.

Since these types of gatherings, without [the supervision] of the Intelligence and Security Agency, are against the law, you are hereby warned to strictly avoid participating in such gatherings.

Commander of the Persian Gulf Fleet and Oman Sea Regions,

[Hand-written note at the top of the page]

[Stamp of “Confidential, Eyes only” in the middle of the page]

[Stamp of Confidential at the bottom of the page]

[Handwritten notes at the bottom of the page]

Report of the day