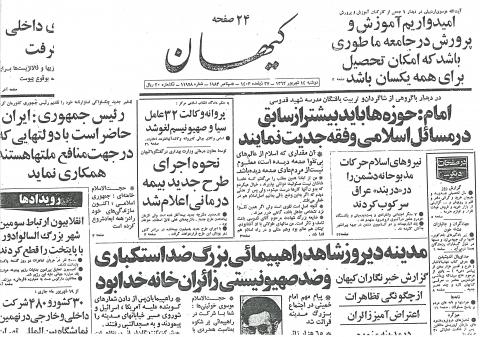 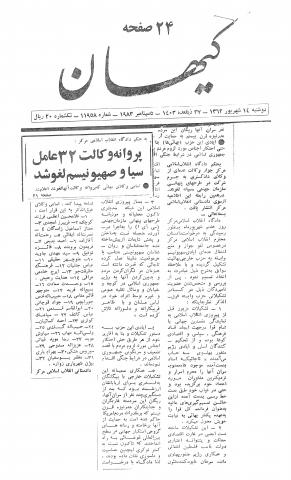 By the order of the Central Islamic Revolutionary Court of Justice, Practicing Licenses of 32 Lawyers [acting as] CIA and Zionist agents cancelled.

Names of Baha’i lawyers whose Practicing licenses were cancelled were announced.

By the order of the Central Islamic Revolutionary Court of Justice: Practicing Licenses of 32 Baha’i lawyers cancelled

Close collaboration of these external organizations with foreigners was so valuable to their masters that following the arrest of a few of their leaders, Reagan, this leader of the present-day looters and criminals of the twentieth century, has risen to support them.

The agents of this party (Baha’is), according to their own confessions, have taken every measure, even hoarding of the people’s necessities, with the intention of weakening and overthrowing the Islamic Republic in times of civil unrest.

The Central Islamic Revolutionary Court of Justice convened on 8/6/[1362] [30 August 1983] to review the request of the honourable National Islamic Revolutionary Prosecutor regarding cancellation of licenses and prohibition of practice of a number of Zionist agents affiliated with the foreign [created] party of Baha’ism.  Following the review of the case history and determination of the membership of the individuals named below in the administration of the affiliated above-mentioned party, having given due consideration to the facts, it was decided as follows:

[1] [It may mean Lawyers’ Bar Association]