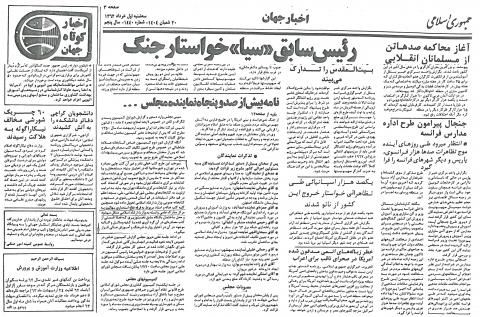 Letter from more than 150 representatives of the Assembly...

Laws enacted by the Consultative Assembly

After the remarks of the deputy chairperson of the Islamic Consultative Assembly, and prior to the routine procedures, he congratulated and consoled the imam and the martyr-nurturing nation for the martyrdom of 19 Revolutionary Guards at the hands of bandits, and read the notifications of the representatives. Then the report of the Second Special Commission of Allameh Tabatabaei’s Library, about the [bill proposing a determination of] the situation of the confiscated books, was discussed. Following the remarks of the representatives who were in favour of and against the bill, and deliberation on the suggestions by the representatives, the mentioned bill was approved.

According to this bill, the scarce [unique] hand-written books and other printed books that have been confiscated in Tehran and other cities and are currently under the control of the “Mostazafan Foundation”, or in the hands of other affiliated institutions and have not yet been collected, should be delivered to the central library of Tehran University, within a maximum of three months from the date of the approval of this law. In case the number of the books exceeds the capacity of the central library of Tehran University, the rest must be delivered, in the following order of preference, to the libraries of:  the Islamic National Consultative Assembly, the Grand Mosque in Qom, the Office of Propaganda in Qom, the Astan-e Quds Razavi in Mashhad, and the Public Library of the Ministry of Islamic Culture and Guidance.

Also, all the books and documents belonging to the perverse, colonizing Baha’i sect must be taken to the Centre of Academic Documents affiliated with Ministry of Islamic Guidance. The former building of the Prime Ministerial Club, which presently houses some of the confiscated books, will be handed over to the Ministry of Culture and Higher Education, with all of its facilities and furniture.