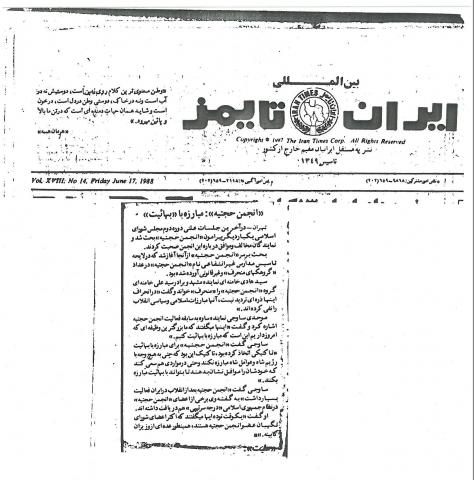 “Homeland is the most spiritual word on earth. Its love is not rooted in water or clay, it is in the heart and blood and perhaps is that same life-giving element that flows in our veins” – Hermann Hesse

Tehran – Once again, in the last open session of the second Islamic Consultative Assembly, there were discussions about the Hojjatieh Society, and the representatives of the both opposition and non-opposition groups spoke about this Society.

The discussions of the Assembly led to Hojjatieh because in the Bill for the establishment of non-profit schools, the Hojjatieh Society [was named] as one of the “perverted and illegal groups”.

Siyyid Hadi Khamenei, representative of Mashhad and brother of Siyyid Ali Khamenei, called the Hojjatieh Society a perverted group and said, “There is [not] the least doubt about their perversion. They have negated the Islamic and political struggles of the Revolution”.

Mowahedi Savoji, the representative of Saveh, pointed to the previous records of the Hojjatieh Society and said, “They used to say their greatest responsibility was fighting the Baha’is”.

Savoji said, “In order to fight the Baha’is, the Hojjatieh Society had invented a strategy that involved collaboration with the regime of the shah, not opposing the shah’s agents, and in some cases even pretending agreement with the regime in order to counter the Baha’is.

He said, “Once, people in the Tudeh [Party] used to say that the majority of the members of the Guardian Council were members of the Hojjatieh Society, in addition to some of the cabinet ministers”.