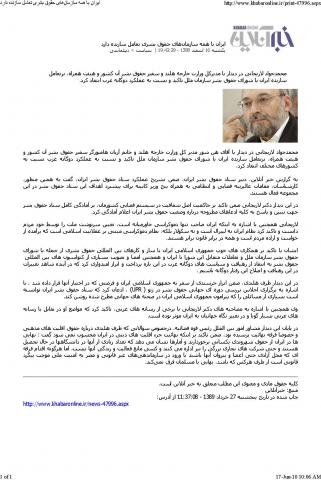 ... Mohammad Javad Larijani, in a meeting with the director general of the Dutch Ministry of Foreign Affairs…, and Mrs. Arjan Hamburger, the human rights ambassador of the Netherlands and the accompanying delegation, emphasized Iran’s constructive interaction with the UN Human Rights Council and criticized the dual action of the West.

At the end of the meeting, the international affairs adviser to the head of the judiciary, answered the questions asked by his Dutch counterpart, about the rights of religious minorities, especially the Baha’i sect, while emphasizing that Baha’ism is not considered a religious minority in Iran. He said, “They have the same citizenship rights, and statistics show that a big number of them are studying at universities and even run large commercial companies, and no one is hindering their activities and lives. But any sectarian action that violates freedom, even for its members and followers, or participates in any illegal organizations detrimental to national security, no matter who―a Baha’i or a Muslim―[they] will be prosecuted.”