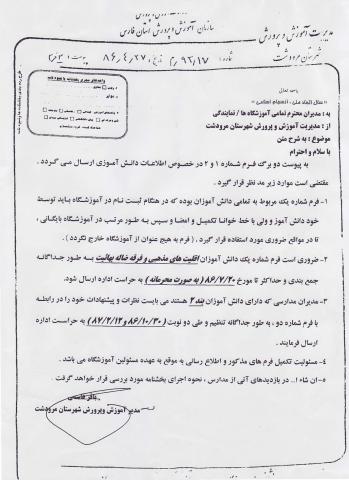 Director of the Department of Education

To: Respected principals of all Institutions/Agencies

From: Director of the Department of Education in Marvdasht

Subject: As stated below

With greetings and admiration,

We forward to you the attached copies of Forms number 1 and 2 on student personal data.  It is necessary that special attention be given to the following.

1- Form number 1 must be completed in legible handwriting by every student, and their parents, during registration at every school.  The form must then be signed and [be carefully] archived in order to be used when urgently needed.  (The form should never be taken out of the school).

2- It is [necessary] that Form number 1 received from students of religious minorities and the perverse Baha’i sect be collected separately and forwarded (confidentially) to the Security Office of the Department of Education no later than 20 Mehr 1386 [12 October 2007].

3- Principals of schools with students described in paragraph two must prepare their comments and suggestions separately regarding Form Number 2 and submit their reports to the Security Office on 30 Dey 1386 [20 January 2008] and 12 Ordibehesht 1387 [1 May 2008].

4- To complete these Forms as stated above and to inform the authorities in a timely manner is the direct responsibility of the school officials.

5- God willing, during the visits to schools, implementation of the circular will be further examined.

Director of the Department of Education, Marvdasht [Signature]