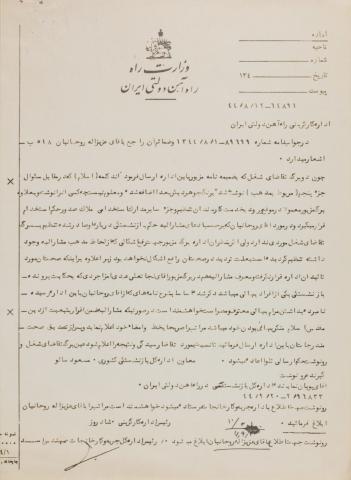 Ministry of Roads and Transportation

The two job application forms attached to the above-mentioned letter, which was received by this office, had the word “Islam” written in a different color ink in front of section five’s question (about religious affiliation), which indicates it was added later, and it is not clear who has added it.  Additionally, the said papers, as part of other employment papers, are usually put together as a proof of recruitment at the time when employees start to work. For Mr. Rowhanian, who claims his retirement order has already been issued, preparation of job application forms would be irrelevant. However, if your office believes that the said papers have been prepared to fix the problem associated with his religious affiliation, it will not be possible to disregard the issue, because the accuracy has not been confirmed by your office and the person who introduced him in those papers is noted as Mr. Nejat-Ali Abdi-Amzajerdi, who is also a Baha’i, according to his retirement paperwork. In addition, Mr. Rowhanian basically admits to, and insists on, being an adherent of the Baha’i belief.

If Mr. Rowhanian acknowledges his adherence to the sacred religion of Islam, and denies that he is a Baha’i, please have him make the declaration clearly in his own handwriting and [under his own] signature, and send it to this office, after confirming the accuracy of its contents, for further review and for [this office to] keep you informed of the result. The original job application form and a copy of the consignment order are returned [to your office] herewith.

A copy is sent to the Office of Railways and Factories for information.  Please inform Mr. Azizollah Rowhanian of the proceedings.

A copy is sent to Mr. Azizollah Rowhanian for his information.

Head of the Office of Railways and Factories. Engineer Asad

Court orders a couple to divorce, as the Baha’i spouse refuses to convert to Islam