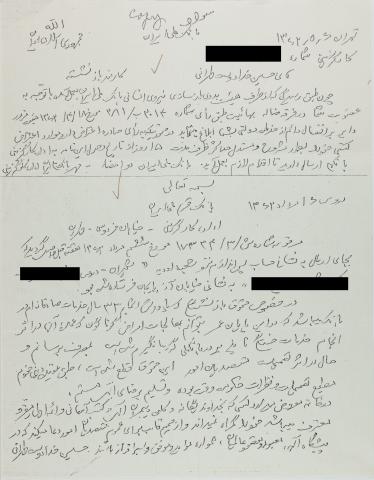 Following the proceedings of Bank Melli Iran’s Primary Division of the Human Resources Restructuring Office, in view of your membership in the perverse Baha’i sect, and in accordance with the Office’s verdict number 2014 B/2-11, dated 18 Tir 1362 [9 July 1983], your indefinite termination of employment is hereby confirmed. In the event of objection, you can submit your detailed appeal with supporting evidence to the Personnel Department within 51 days of receiving this letter, so that necessary action can be taken.

Regarding my pension, which [illegible] of 33 years of my faithful service in the bank, so that by the end of my life I can seek treatment for my numerous illnesses, the majority of which are the result of  my tireless work at the bank, a decision has now been made by the authorities to terminate my pension. In obedience to my religious beliefs, I submit to the decisions made by the present government and the Will of God.

Finally, I would like to state that one who believes in one God and all the holy Prophets and the holy Books does not consider himself to be perverse. I pray for the authorities, from the bottom of my heart, to be successful and honored in the presence of God.