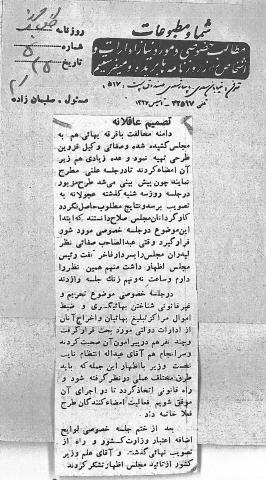 The scope of the opposition to the Baha’i sect has reached the Assembly, too, and Safai, the member of parliament from Qazvin, devised a bill which has been signed by quite a number of people, so that it could be presented at the Assembly’s open session. Since [they] projected that the said bill might be approved hastily at last Tuesday’s session and without having achieved the intended results, the Assembly’s [leaders] found it more appropriate to discuss it at a private session.

At the private meeting, the subjects of excommunication and the illegality of Baha’ism, impounding the possessions of the Baha’i Centres and expelling them [Baha’is] from the government offices were discussed, and a few of them also talked around the subject.

Finally, Mr. Abdollah Entezam, the deputy prime minister, expressing that various practical ways should be considered and a legal way chosen, so that a successful implementation is ensured, ended the activity of the signatories of the plan [bill] for now.

After the end of the private session, additional bills for the accreditation of Ministries of the Interior and Roads passed their final approval, and Mr. Alam, the minister of the interior, expressed his appreciation of the Assembly for its approval.