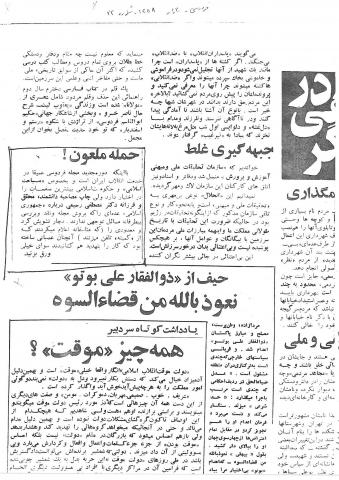 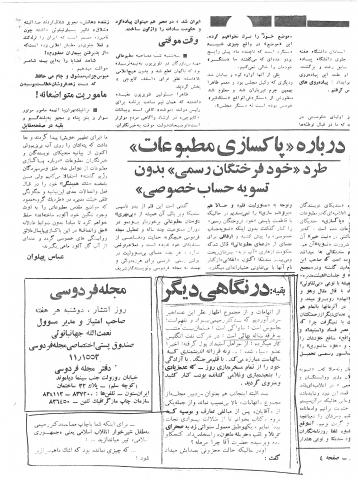 The Attack of the Accursed!

Although the recently reviewed Ferdowsi Journal is fully at the service of the Iranian Revolution, especially “discussion on Islamic matters”, and the Islamic government occupies most of its pages, yet, publishing the interview of the scholar, researcher and sagacious Dr. Mostafa Rahimi regarding “The Islamic Republic” has disturbed a number of those who do not pay attention to the method of the journal and its unbiased reviews, and has enraged a few (who, unfortunately, claimed to be called from the Committee) to the point where they ventured to make threats.

Regardless of so many accusations, and from the opinions of this recent group, we deduced that Dr. Rahimi is illiterate and lacks understanding! He is a spy! Belongs to SAVAK! He is not a Muslim! He belongs to the perverse Baha’i sect! He has been serving at the British Oil Company! He has received pay from the autocratic agents! He has recently become a member of the CIA! And thus, he is not the sagacious illumined person who has been struggling for years through his pen, who has withdrawn and secluded himself from all kinds of masquerades and all those who were enslaved!

Many times of course, yours truly, too, as the chief editor of the Journal, was not spared from receiving a portion of the above-mentioned “accusations”. As an example, one of those “gentlemen”, after some flattering, recommended that I should go and “read some books in order to be saved from the darkness of ignorance” and suddenly, as usual, he galloped to the plains of Karbila and gave me the title of “the cursed Hurmala” [meaning, damned Hurmala, the person who killed son of Imam Hosein in Ashura]. I became curious and asked, “Your honour, why did you call me “the accursed Hurmala?”.Expressing sadness in his voice, he said: “Because you, by publishing the interview of Dr. Rahimi, are shooting the suckling child of the Islamic Revolution, meaning, ‘the Islamic Republic’…!”

Tears were almost flowing from my eyes!