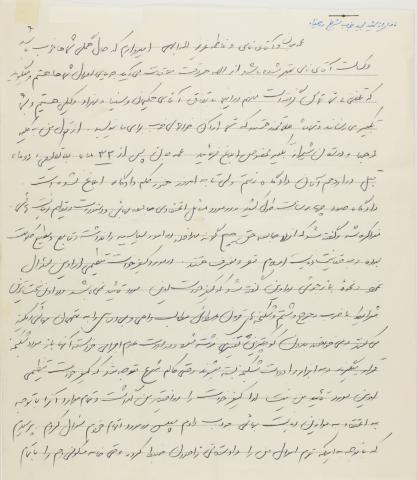 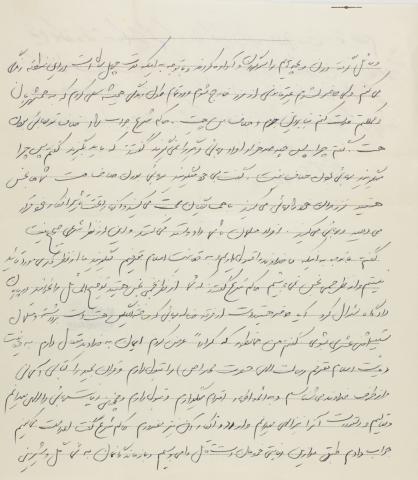 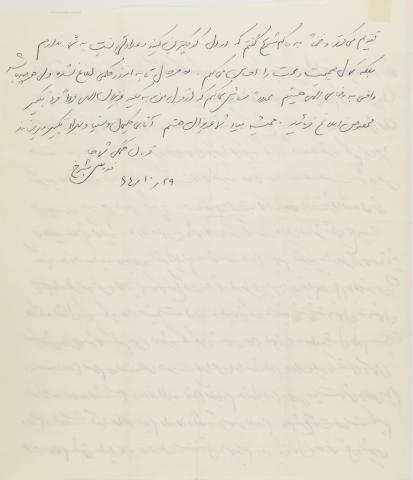 A letter from the beloved martyr, Mr. Shabrokh, may my soul be a sacrifice for him

I hope you are all well and Mr. Nami’s illness has improved. I enquire about your health from Elaheh whenever she comes here to visit and she says that she has been in contact with you telephonically.

Here, I am together with Mr. Hakiman and Sina, and also Behzad Vakili, who convey their greetings to you. They all are interested in receiving from you your written, wonderful dreams. On my behalf, kindly convey my fondest regards to all the friends of Shiraz.

My beloved Aunt, after the passage of 32 months of being in a pending situation, two months ago, on 2 Aban [3 November], I was summoned to court. But up to now, there has not been any court verdict issued. The [hearing] took about four hours, where the matters of the beliefs of the Baha’i community, the ordinances and teachings of the Baha’i Faith, were discussed. They were told that the Baha’is have no right to interfere with political affairs and that they are obedient and dutiful followers of the government, and they also confess and believe in the truth of Islam.

They inquired about the indictment that had been prepared at Evin Prison and the interrogation methods at Evin Prison. It was said that indictment of Evin is not acceptable. At Evin, the most difficult conditions, with beating, stabbing, condemnation and medieval tortures, prevail. [They attribute] frivolous and baseless matters to the condemned Baha’is, and demand that not the slightest change be written, and if one does not [accede to] their demands, they will again be tied to the tools and instruments of torture.

Even the sharia judge realized that the indictment prepared in Evin is not acceptable to me. Therefore, he left the indictment to my will, where I answered all its clauses based on Baha’i principles and beliefs. Then I asked about my own accusations. I asked what crime I had committed, since all my possessions had been confiscated by the Prosecutor’s Office of Zahedan; even my dwelling place and all it contained had been seized, making my wife and children vagrant wanderers. I have been living in this area for forty years and did not attempt to leave the borders unlawfully, and throughout my life, I have always tried to be of service to my fellow compatriots and my nation.

The sharia judge answered, “Your guilt is to be a Baha’”. I said, “Why, then, are the other hundreds of thousands of Baha’i individuals not being arrested?” He affirmed that they should be arrested. I said, “Why, then, is it said that to be a Baha’i is not a crime?” He said, “They talk nonsense. To be Baha’i is a crime. You people are unclean [untouchable], you make your children Baha’is. [You] speak to your neighbours, influence their minds and make them Baha’is. The Muslims engage in trade with you and from the sharia point of view this is incorrect.” I said, “Although we believe in God and confess to the truth of Islam, [they] say that our thoughts are not agreeable, and our physical bodies are [not] clean”. The sharia judge said, “Bodily-wise you are unclean [untouchable]; read the Towzihol-Masael [Practical Treatise]”.

At the end, the court asked, “Are you ready to leave the perverse Baha’i sect, which was made by the British, and become Shi’i Muslims of the Twelve Imams?” I said, “As I have said time and again, I believe in the Almighty God and confess the truth of Islam, and accept the station of the Prophet Mohammed (peace be upon Him) as the divine Messenger and, believe that the Holy Qur’an  is a divine Book revealed by God. I accept and respect the Holy Imams. I also believe that the Baha’i Faith is a divine religion and believe that its teachings and ordinances are divine. I excuse myself of denying and rejecting it”. The sharia judge said, “We will execute you”. I answered, “According to my religious standards, I shall kiss the hands of my executioner, and my survivors will bring you flowers and sweets.” I also told the ecclesiastical judge, “I do not have the slightest grudge in my heart against you; instead, I feel the utmost sincerity and affection.”

In any case, up to this day, I have not been notified of any verdict, but whatever it may be, I am satisfied with the Divine Will. I [ask you again to] convey on my behalf my special greetings to each and every one of the beloved of God. I always remember you dear ones. Mr. Hakiman, Sina and Behzad send their greetings.

May my life be a sacrifice for all of you,

Hrana News agency: Two letters from Azita Rafizadeh in prison to her child

HRANA: Letter from Azita Rafizadeh to the Head of judiciary

HRANA: Letter from Fariba Kamalabadi from Evin prison to her grandchild

Kayvan Rahimian's letter from prison to mark the fourth anniversary of the death of her wife, Fereshte Sobhani

Roozonline: An article from Keyvan Rahimian from prison

Hosein Yazdi Doust's letter to his family from Evin Prison

News of Fidros Shabrokh's execution printed in Kayhan (of London)

Fedros Shabrokh - Executed by hanging in Zahedan on 9th May 1986

Appeal for justice by Fedros Shahrokh to Islamic Judge of Zahedan

Tarazollah Hakiman, in Zahedan Police prison, requests his legal representation to be transferred to Islamic Revolutionary Prosecutor in Zahedan

Letter from Mahmoud Jalili to Azizeh Jalili from prison

Letter of Rouhollah Taalim before his execution

Shamim Sayah: Mr Prosecutor, I could not go to school this year

Letter from Farhad Asdaghi to his son, Bashir, from Evin prison

Letter from Farhad Asdaghi from prison

Letter from Farhad Asdaghi to his family from Evin prison

Last note by Nosratollah Vahdat in prison just before his execution

Letter from Ehsanollah Kasiri to his family from Evin prison

Letter by Ziaollah Maniei Oskoui to his family from prison

Saberi’s letter from prison to his family

Dr Masih Farhangi's letter to his wife before his execution

Bozorg Alavian's last letter to his wife before his execution

Farhang Mavaddat's will before his execution in Evin prison

Tarazollah Khozein’s last letter to his family before his execution

Badiollah Farid’s letter from prison to his son

Poems from prison by Ehsanollah Mehdizadeh

Badiollah Farid's letter to his father from Evin prison

Hosein Motlagh appealing for justice to Sharia Judge of Hamedan

Letter to Ayatollah Rabbani about conditions of two Baha’i prisoners

Letter by Jalal Mostaghim to his family from prison

Bahar Vejdani’s letter to his family before execution