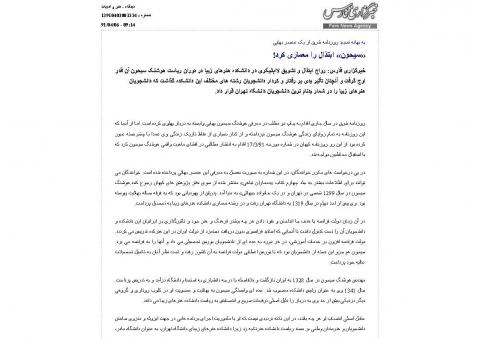 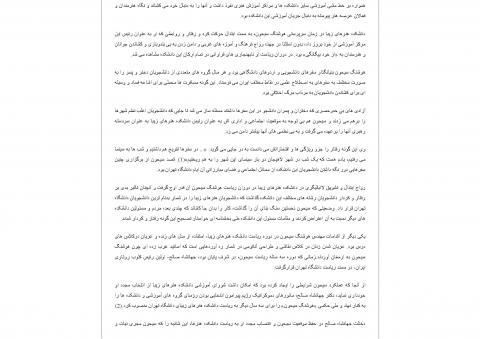 Fars News Agency: The prevalence of vulgarity and negligence in the Faculty of Fine Arts during the presidency of Houshang Seyhoun reached such a peak and had such a bad effect on the behaviour and performance of students of different disciplines, that the students of Fine Arts [came to be] among the most disgraceful students of Tehran University.

This year, Shargh Newspaper published two articles introducing Houshang Seyhoun, the Baha’i, affiliated with the Pahlavi court. But since this newspaper did not cover all aspects of Houshang Seyhoun’s life and deliberately passed through many dark corners in his life with its eyes closed, from today, Kayhan Newspaper published articles in the issue dated 17 Khordad 1391 [6 June 2012], exposing the true nature of Houshang Seyhoun, which was welcomed by the [readers]. Following repeated requests from readers, this issue introduces this Baha’i element in detail. Readers can refer to the fourth volume of the book “Memaran Tabahi”, published by Kayhan Research Office, for more information. Houshang Seyhoun was born in 1299 [1920] in Tehran to a Baha’i family. His father was a Jew who had joined the perverse Baha’i sect. After graduating in 1319 [1940/1941], he went to the University of Tehran and studied architecture at the Faculty of Fine Arts.

Seyhoun was one of the students who went to France with a scholarship awarded by the French government and completed his higher education under their supervision. The architect Houshang Seyhoun returned to Iran in 1328 [1949/1950]; he was immediately employed by the university with an associate degree and began teaching. In 1341 [1962/1963], he was appointed head of the faculty. Houshang Seyhoun was the most active architect during the reign of Mohammad Reza Pahlavi, and was offered most of the important renovation and reconstruction projects due to his good services.

Seyhoun established an art gallery called “Seyhoun Gallery” in one of his properties on Jomhoury-e Eslami Street. He got the licence and documents of this gallery in the name of his wife, Masoumeh Seyhoun. Masoumeh was a student of Seyhoun in the Faculty of Arts and was very different in age. Seyhoun Gallery was apparently a place for the exchange and display of works of art, but it soon distanced itself from cultural goals and became a place of commerce and a place for buying and selling antiques, to the point where some considered him a shopkeeper.

The Zionist site Wikipedia explicitly mentions him as a Baha’i. Several official websites of the Baha’i sect have also praised the member in detail.