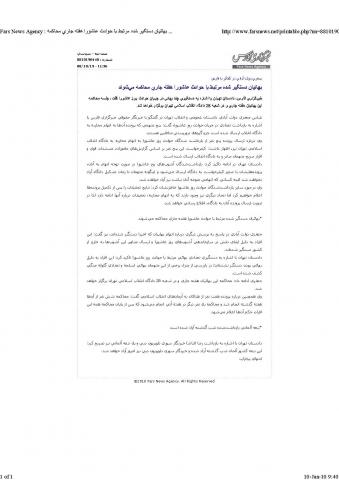 Jafari Dowlatabadi in a Conversation with Fars,

Abbas Jafari Dowlatabadi, Tehran public prosecutor, in an interview with Fars News Agency’s legal reporter, referring to the arrest of a number of people during the Ashura events, said that the five defendants whose case had been sent to the Revolutionary Court on charges of Muharabah[i], are part of a terrorist group of Monafeghin...

In response to another question about the charges of the recently arrested Baha’is, Jafari Dowlatabadi said, “These people have been arrested for playing a role in organizing the riots on Ashura and sending pictures of the riots abroad.”

Referring to the arrest of a number of Baha’is in connection with the Ashura events, the Tehran public prosecutor emphasized, “These people have not been arrested because they are Baha’is; in a search of the homes of some of these Baha’i defendants, guns and a number of bullets were found.”

Jafari continued, “The trial of these Baha’is will be held this week in Branch 28 of the Islamic Revolutionary Court of Justice, Tehran.”

[i] [In Islamic law, the crime of muharabah is taking up arms against Islamic government or Islamic laws. An individual who commits the crime is Muharib]

As the world celebrates the bicentenary of the birth of the Bab, Baha’is in Iran experience added pressure

Iranwire: Wave of arrests, house raids, detention, and uncertainty among Bahai's in Karaj

Letter by Fariborz Sanaie’s wife to Director of Medical Council

Shamsi Khadem asks for release of her daughters, Molouk and Touran Khadem

A Baha’i arrested in Babol

Order to arrest Khosrow Izadyar and inspect his house

Are charges to be dropped against alleged culprits of troubles in Aran?

Telegram from the Ministry of Communications to Prime Minister

Bahiyyeh Tebyani: My husband has been in jail for ten days