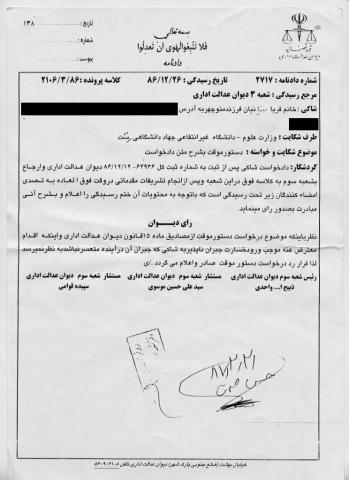 Judiciary of the Court of Administrative Justice

Follow not the lusts (of your hearts), lest ye swerve

Administered by:  Branch 3 of the Court of Administrative Justice

Plaintiff:  Miss Faria Tebyanian [court order refers to the plaintiff as Bitanian, which is not consistent with the name on other documents], daughter of Manouchehr. [Redacted]

Subject of Complaint and Claim:  Interim order – as indicated in the request for judgment

Procedural synopsis:  Subsequent to the registration of the complaint under number 64936 – 12 Esfand 1386 [2 March 2008] at the Court of Administrative Justice and assigning the case to Brach 3, where it was registered under the above-noted case reference number, and after completing routine preliminary protocol, the tribunal, at a special time and in the presence of the undersigned members, reviewed the file documents.  The tribunal then concluded the proceedings, and rendered the following decision:

This is a true copy of the original

Branch 3 of the Court of Administrative Justice, Secretariat

Eslah news: Letter from Zibakalam to Larijani about Baha’is’ right of education

Ayda Ghajar: Execution of the Baha’is of Hamadan; letter to Mohammad Javad Larijani

PCED: Response to article claiming that “all applicants end up going to university”