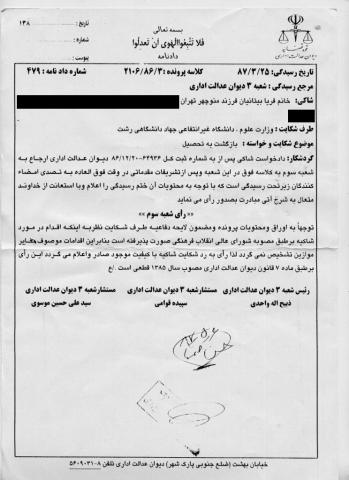 So follow not [personal] inclination, lest you not be just.[1]

Administered by: Branch 3 of the Court of Administrative Justice

Subject of complaint and claim: Re-enrolment in university

Procedural synopsis:  Subsequent to the registration of the complaint under number 64936 – [dated] 20 Esfand 1386 [10 March 2008] at the Court of Administrative Justice and assigning the case to Branch 3, where it was registered under the above-mentioned case reference no., and after completing routine administrative protocol, the tribunal, at a special time and in the presence of the undersigned members, reviewed the file documents.  The tribunal then concluded the proceedings, and by relying on the Almighty God, rendered the following decision:

Subsequent to reviewing of file documents and enclosures, including a statement of defence from the respondent, considering that the action taken against the plaintiff is in accordance with the ratified bill of the Supreme Council of Cultural Revolution and therefore is not inconsistent with the principles, the Tribunal hereby dismisses the complaint as it stands and issues an order thereof.  This decision is in accordance with Article 7 of the Court of Administrative Justice Act, ratified in 1385 [2006/2007], and is final.