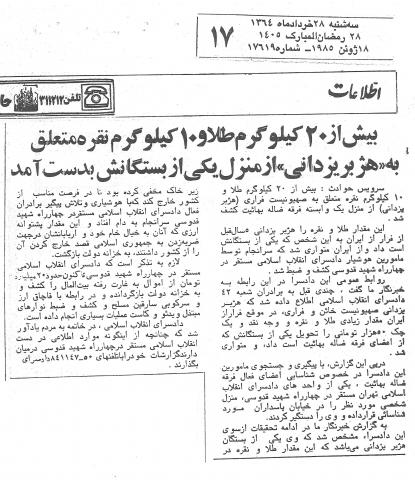 More than 20 kilograms of gold and 10 kilograms of silver that belonged to Hojabr Yazdani were discovered in the house of one his relatives.

Havades [Events] Service: More than 20 kilograms of gold and 10 kilograms of silver, which belonged to the Zionist fugitive (Hojabr Yazdani) were discovered in the house of a person affiliated with the perverse Baha’i sect.

Hojabr Yazdani, before escaping from Iran five years ago, gave this amount of gold and silver to one of his relatives and ran away. It was finally discovered and confiscated by the intelligence officers of the Islamic Revolutionary Prosecutor’s Office, situated on the Shahid Qoddusi crossroad.

The public relations department of the Public Prosecutor’s Office told our reporter regarding this matter that the comrades of the Revolutionary Prosecutor’s Office of section 42 were informed a while ago that the Zionist fugitive and traitor Hojabr Yazdani, during his flight from Iran, had entrusted a big quantity of gold, silver, cash and a cheque for 50,000 tumans to one of his relatives, who is a member of the perverse Baha’is sect, and ran away.

Following this report, by constant efforts and investigations of the agents of this Public Prosecutor’s Office to identify the active members of the perverse Baha’i sect, one of the units of the Revolutionary Prosecutor’s Office, situated on the crossroad of Shahid Qoddusi [Street], had identified the house of a person under observation on Pasdaran Street and arrested him.

According to the report of our correspondent, through the continuation of the investigations by the Prosecutor’s Office, it became clear that he was one of the relatives of Hojabr Yazdani, who had buried this amount of gold and silver, so that at a propitious time he could smuggle it out of the country, and by intelligence and constant efforts of active brothers at the Revolutionary Prosecutor’s Office, situated at the Crossroad of Shahid Qoddusi [Street],  they finally fell into the set trap, and this amount of currency, which they and their masters had intended to take out of the country and harm the Islamic Republic by their wishful thinking, was returned to the national treasury…