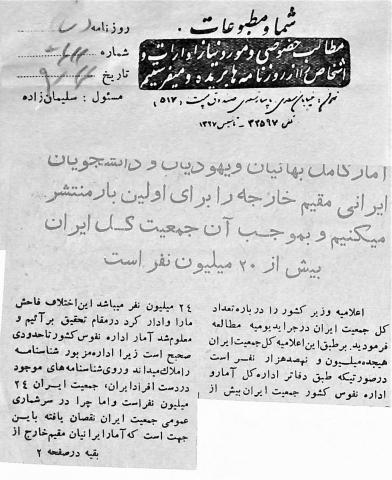 We publish for the first time the complete statistics of Baha’is, Jews and Iranian students living abroad and according to that, the total population of Iran is more than 20 million people.

You read the announcement of the minister of interior about the total population of Iran in the daily press.

Most interestingly, many in Tehran and other provinces identified themselves as Baha’is and in some cities, such as in Gilan Province, as statisticians did not write the name ‘Baha’i’ in the questionnaires, it led to clashes and riots. As in Rudsar, the Baha’is of that city sent a telegram with the name Baha’i to the Statistics Office and complained about the statisticians.

Although (Baha’i) is not an official religion, in most cities Baha’is were able to explicitly reveal their religion; because according to the order received from Haifa, they were obliged to introduce themselves explicitly and clearly. It has been said that Baha’i statistics will not be published due to certain considerations and their statistics may be obtained unofficially.  Apart from Baha’is, some of them introduced themselves as (Azali) and (Babi)…