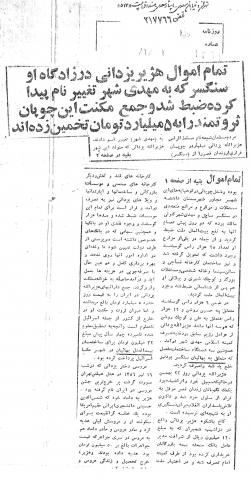 All of the possessions of Hojabr Yazdani in his birthplace, Sangesar, which has been re-named Mehdishahr, were confiscated. The total wealth of this rich shepherd is estimated to have been five trillion tomans.

The Muslim Shia people have changed the name of the birthplace of Hojabr Yazdani, the fugitive billionaire farmer of Ghasr Prison, from (Sangsar) to (Mehdishahr). Hojabr Yazdani, who was born in this town and who was a shepherd in the adjacent town of Semnan, owned numerous pieces of land and farms and pastures in the former Sangsar and current Mehdishahr, all of which were confiscated for the benefit of the Beit-ul-Mal [People’s Treasury] two days ago. For instance, one of his farms housed 25,000 head of sheep, which were [confiscated]. Also, the fabric production factory, the movie theatre, his personal residence and other large and small pieces of real estate in town and resort areas, were confiscated upon identification and became a part of the People’s Treasury.

Hojabrollah Yazdani, having shaved his moustache, succeeded in fleeing from his cell in the Ghasr Prison on 22 Bahman [11 February] with the help of prison wardens. Thus far, the efforts of the Revolutionary Guard to apprehend him have not succeeded.

The impressive mansion of Hojabr Yazdani, located in the Dezashib of Shemiran, which he had purchased for 120 million rials from the executive director of the defunct Bimeh Bazarganan Bank, was confiscated by the Committee of the Imam and was placed under the control of the people.

The sugar, shoe, and other industrial factories and business establishments, and buildings, apartments, and villas belonging to Yazdani, were also confiscated. It has been decided that a supervisor will be appointed by the government for these confiscated establishments, hundreds of thousands of sheep, and his sums of cash in the banks, and also the shares he has had in private banks, so that there would be no interruption in administering the related affair. Full advantage can be taken while conserving costs, and the income can be deposited into the nation’s Treasury. The total wealth of Hojabr Yazdani in Iran is estimated to be five trillion tomans. However, the amount of his wealth and riches outside the country, particularly in Israel, is unknown. What is known—based on research—is that four years ago he had paid 32 million tomans to build the Baha’i House of Justice in Akka, Israel.

The wedding of Yazdani’s daughter, which took place in the evening of 19 Tir 1356 [10 July 1977] in Tehran’s Hilton Hotel, was named as one of the most expensive weddings in Iran. Hojabr gave an expensive house to his son-in-law, Shamsoddin Hosseini, an Iranian student living in the United States, for him and his bride Layli to live in. The mother of the bride and the mother of the groom also gifted the bride with two sets of jewels, the price of which is estimated to have been about 50 million tomans. Hojabr undertook to pay the education costs and living expenses of the bride and the groom.