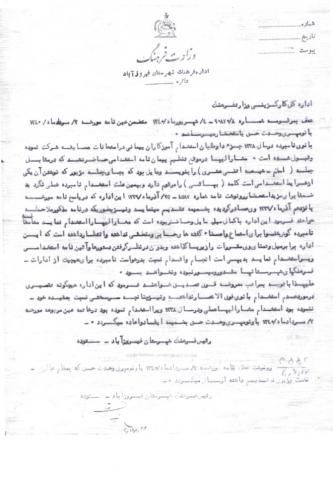 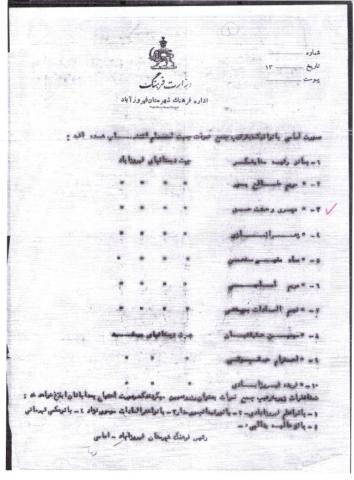 In 1338 [1959/1960] the aforementioned individual successfully completed the exam for contract-based teaching positions.  At the time of signing the contract, however, the applicant refused to write the phrase (Islam, Twelver Shi’ism), which is one of the conditions of employment, and wanted instead to write the word (Baha’i); thus, the process of hiring could not be completed.  For additional information, a copy of letter number 4587, dated 25 Azar 1339 [16 December 1960], issued by this Office in response to the applicant’s correspondence of 15 Azar 1339 [6 December 1960], is attached herewith.  As the noted letter indicates, this Office was eager and willing to hire the applicant.  Unfortunately, however, she was not reasonable in accepting reasoning and logic, and expected this Office instead to put aside and ignore employment regulations and conditions and hire her according to her demand.  Obviously, accepting her request is not and will not be possible by any of the regional cultural offices [in towns and villages].

Considering the above, you agree that this office is in no way at fault in not proceeding with hiring the noted applicant and had she not insisted hard-headedly on her belief, she would have been hired in 1338 [1959/1960].  Attached, please find Mrs. Mehri Vahdat-Hagh’s original letter of 3 Mordad 1340 [25 July 1961] for your reference.

[The official document containing the list of all the participants that successfully passed the exam for teaching position from the Ministry of Culture is attached and is mostly illegible. Mrs. Mehri Vahdat Hagh is listed as the third person in this list.]