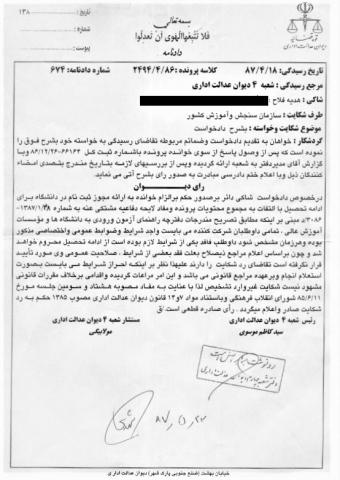 Subject of grievance, and claim: Same as the plea

Procedural Brief: The plaintiff has submitted her grievance and the content of the file and has asked for an investigation of her case, cited above, which, following its registration under reference number 66164- 26 Esfand 1386 [16 March 2008] was forwarded with a statement from the Director of the Branch to this Branch for review. After reviewing the file on the above date, the undersigned adjudicators concluded the session and rendered the following decision:

Subsequent to reviewing the plaintiff’s request concerning enrolment in university for the purpose of continuing her education and examining file enclosure number 3086/D- 28 Farvardin 1387 [16 April 2008], stating that according to the guidelines of the National Entrance Examination for universities and institutes of higher education all candidates should meet the corresponding individual and general requirements, with failure to meet any one of the requirements resulting in ineligibility to continue education; based on the statement of the competent authorities confirming her failure to meet some of said requirements, her competency was not approved, and her complaint is therefore denied. As according to law these requirements were announced to her by the judicial authorities and no unlawful action is evident, the claim of the plaintiff is therefore not valid and is denied.  Therefore, according to the ratified law issued in the eighty-third meeting of the Supreme Council of Cultural Revolution, dated 11 Shahrivar 1385 [2 September 2006], and based on Articles 7 and 14 of the law on Courts of Administrative Justice ratified in 1385 [2006/2007], the tribunal denies the plaintiff’s request. This verdict is final.

Head of the Fourth Branch of the Court of Administrative Justice

Fourth Branch of the Court of Administrative Justice