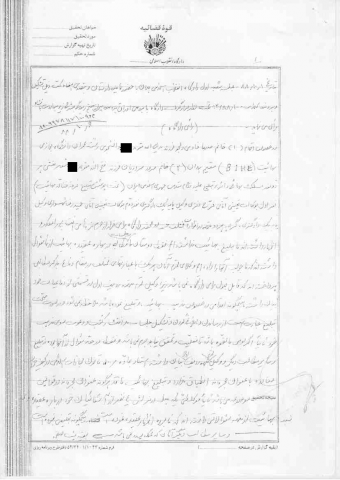 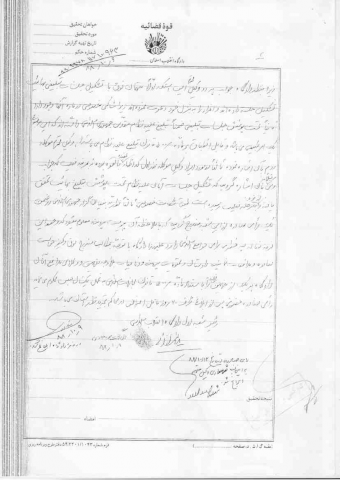 On 1 Dey 1388 [22 December 2009], Branch 1 of the Islamic Revolutionary Court in Hamadan convened a session in the presence of the prosecutor and under the supervision of the undersigned to review case reference 12/88/100.  Subsequent to reviewing the file documents, the court concluded the session and issued an order as follows:

1) Sahba Khademi Deljou, daughter of Badiollah, born in [redacted], student of Civil Engineering at the online/correspondence Baha’i university (BIHE), resident of Hamadan; 2) Sorour Sorourian, daughter of Fathollah, born in [redacted] [illegible], both of whom are Baha’is, have been charged with propaganda against the sacred regime of the Islamic Republic of Iran, by [engaging in] teaching activities in favour of the perverse sect of Bahaism.  The first accused is represented by Counsel Mr. Farrokh Daftari, Barrister and Solicitor, and the second accused is represented by Counsel Mr. Hamid-Reza Shahsavari, Barrister and Solicitor.  Both accused individuals have denied before the court having been engaged in propaganda for Bahaism, and they have claimed that they only responded to the questions of their friends concerning Bahaism at their study meetings.  The Counsels for the accused each made submissions in defence [of their clients] which the court did not find convincing.  In his submission, the respected Counsel for the first accused mentioned that there was no evidence of propaganda activities in favour of Bahaism [sic.]; and that propagation is promoting and providing information, holding meetings and offering books and inviting [the potential recruit] to accept their religion; even then, until such invitation is accepted, the act is not a crime; in this case [his client] only responded to questions and did not engage in teaching, etc.  Counsel for the first accused further claimed that Article 500 of the Islamic Penal Code, as mentioned in the indictment, does not correspond with the charges and that propagating Bahaism is not considered a crime or in any way an infringement of laws and regulations.  [Counsel added] that his client invited four people to her home who asked questions about Bahaism to which she responded and this was not at all propagation.  Furthermore, [the Counsel] provided other reasoning that the court did not find acceptable.

Considering the statements of both lawyers, it is apparent to the court that; 1) the accused individuals held meetings with the aim of propagating Bahaism and invited people to their homes with that intention, as there is a plaintiff complaining against them; 2) under the pretext of propagation [for Bahaism], they engaged in propaganda against the sacred regime of the Islamic Republic of Iran—a natural result; therefore, it [the charge] is in accordance with Article 500 [of the Islamic Penal Code] which addresses propaganda against the regime and which has been mentioned by the counsel for the second accused.  Furthermore, with respect to the objections made by the Counsel for the first accused, as to the actual realization of such attempt, the court is convinced, as mentioned previously, that, according to the plaintiff, these meetings [which were held] in opposition to the regime were actually held under the pretext of propagation for Bahaism and in fact were moved from potential to practice.  Furthermore, the views of the founder of the Islamic Republic, which are mentioned in an order [previously] issued by this Branch, reveal the dangers of this perverse sect to the Islamic communities.

Therefore, having considered the above facts, the content of the indictment, the submissions of the prosecutor, the content of the case file, and the unfounded reasoning of the accused persons and their counsels, this court sentences each of the above mentioned accused to one year’s imprisonment based on Article 500 of the Islamic Penal Code.  This court order was issued in the presence of the accused and can be appealed within 20 days at the provincial courts of appeal.

Head of Branch 1 of the Islamic Revolutionary Court