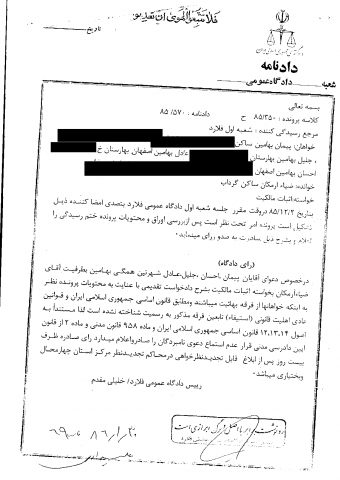 On 2 Esfand 1385 [21 February 2007], at the appointed time, the First Branch of Falard Public Court, under the command of the undersigned, is in session. The case file is under review.  Subsequent to the review of the file and its contents, the hearing was concluded and the following decision rendered.

(Decision of the Court)

Regarding the lawsuit of Messrs. Peyman, Ehsan, Jalil, and Adel, collectively known as Bahamin, claiming proof of ownership, in dispute with Mr. Zia Armakan as detailed in the case presented, taking into account the contents of the file and owing to the plaintiffs’ belonging to the Baha’i sect, and in conformity with the Constitutional Law of  the Islamic Republic of Iran and the Law on Citizens’ Rights, the followers of the said sect are not officially recognised; therefore, based on Articles 12, 13, and 14 of the Constitutional Law of the Islamic Republic of Iran, Section 958 of the Civil Law, and Section 2 of the Civil Hearing Procedure Act, the decision was issued not to hear the case of the named and to announce that the declared judgement may be appealed in the courts of appeal of the central province of Chaharmahal and Bakhtiari within twenty days after the announcement.

This is the true copy of the original.