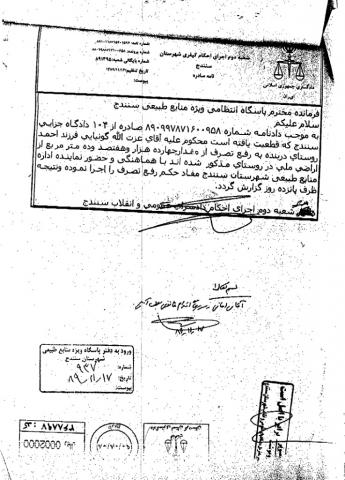 Branch 2 of the Execution of Penal Judgments in Sanandaj

With reference to court order number 890997871600958, issued from [Branch] 104 of the Penal Court in Sanandaj, which was confirmed and endorsed, the accused Mr. Ezzatollah Gouniyaie son of Ahmad, in the village of Darbandeh, has been ordered to be dispossessed of 14710 square meters of state property in the noted village. This is to instruct that the order of dispossession must be carried out in coordination with, and in the presence of, a representative of the Natural Resources Office in Sanandaj, and results reported within fifteen days.

Registered at the Office of the Natural Resources Special Station

[Signature of the Justice Administration of the Province of Kurdistan]

Blocking the entrance of the Baha’i cemetery in Ahvaz

Refusal to burry the body of Mohanna, a 12 year old in Tabriz

Letter from Judiciary expert about the Baha’i cemetery in Ahvaz

Celebrations to mark the birthday of the hidden Imam, organised by Revolutionary Guards in Baha'i Cemetery of Shiraz - June 2014

Pause in enforcing court order on Baha'i cemetery in Darzikola

The Baha’i Cemetery of Ivel has been placed for auction

Baha'i bodies are exhumed by Tehran

Exhumation of bodies is a violation of religious law

Confiscation of Omana company and the Baha’i cemetery

Plot of land for Baha'i cemetary in Chabahar confiscated

Local council banner in Baha'i cemetery of Ardestan, banning burial of the dead in the cemetery - December 2016