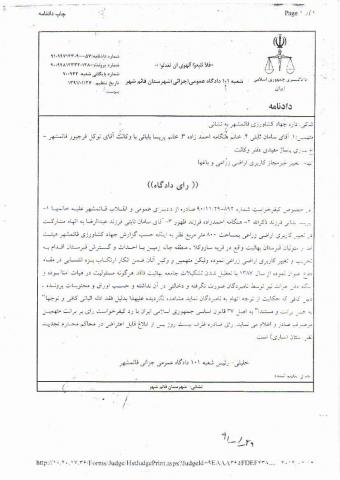 Branch 101 of the Public (Penal) Court in Qaemshahr

Charged with:  Unauthorised changing of the use of agricultural lands and orchards [for the Bahá’í cemetery]

((Decision of the Court))

Indictment number 892-29 Bahman 1390 [18 February 2012] has been issued by the Public and Revolutionary Prosecutor’s Office in Qaemshahr against 1- Mrs. Parisa Babaei, daughter of Zekrollah; 2- Hengameh Ahmadzadeh, daughter of Zohour, and 3- Mr. Saman Sabeti, son of Abdor-Reza, for conspiracy in changing the use of 800 square meters of agricultural lands. According to the statement of the Ministry of Agriculture Mobilization in Qaemshahr, the board of directors and caretakers of the Bahá’í cemetery, located in the village of Saru Kola in the Chaleh Zamin district, have destroyed and expanded the agricultural lands and established a cemetery. However, the accused individuals and their counsel rejected any wrongdoing and stated in their defence that they have had no responsibility as the executive directors since the closure of the Bahá’í administrative institutions in 1387 [2008/09], that the burials have not been carried out by them, and that they have had no involvement in such matters. Given that there is no evidence in the file that substantiates the allegations against the accused, and in light of the principle of presumption of innocence, pursuant to Article 37 of the Constitution of the Islamic Republic of Iran, [the court] dismisses the indictment and issues a verdict to acquit the accused individuals.  This decision can be appealed within 20 days of issuance at the respected courts of appeal in the Province of Sari.

Head of Branch 101 of the Public Penal Court of Qaemshahr

Letter by Helen Misaghi: Bahai's in Tabriz have not been allowed, in the past five years, to bury their dead

Parisa Babaei sentenced to prison for ‘propaganda against the regime’

HRANA: Three Baha'is interrogated for their association with the Baha'i online university

HRANA: Three Baha'is interrogated for their association with the Baha'i online university

Request to obtain a plot of land for cemetery in Isfahan

Permission to build cemetery in Shahr-e-Rey