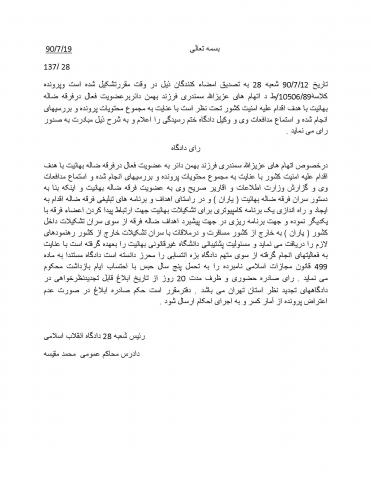 On 12 Mehr 1390 [4 October 2011], a hearing at Branch 28 [of the Islamic Revolutionary Court of Justice of Tehran], presided over by the undersigned, was held on the appointed date and the charges against Mr. Azizollah Samandari, son of Bahman, of being an active member of the perverse Baha’i sect with the intention to act against the national security, as [listed in] case reference Ta/10506/89, were considered. Subsequent to reviewing the case documents and the investigations carried out, and hearing his defence and his lawyer’s argument, the court concludes the proceedings and renders a decision as noted hereunder.

Concerning the charges against Mr. Azizollah Samandari of being an active member of the perverse Baha’i sect with the intention to act against the national security, and subsequent to reviewing the case documents and investigations carried out, hearing his defence, [reviewing] the report from the Ministry of Intelligence, and his explicit admission to being a member of the perverse Baha’i sect, and that at the instruction of the leaders of the perverse Baha’i sect (the Yaran), and in line with the goals and teaching plans of this sect, he has developed a computer programme for the Baha’i administration as a means for communication between members of this sect and setting plans for advancement of the goals of this perverse sect, he travelled abroad on behalf of the leaders of the internal administration (the Yaran), to receive necessary guidance in his meeting with external administration leaders; and considering that he has the responsibility to provide support to the illegal university; the court, in light of to the activities carried out by the accused, considers the attributed charges to be well-founded. Therefore, pursuant to Article 499[1] of the Islamic Penal Code, the court sentences the accused to five years’ imprisonment, counting the period of pre-trial custody. This court order was issued in the presence of the accused and can be appealed within 20 days of its issuance to the Court of Appeal in the Province of Tehran. The office is obliged to announce the issued order and, in the case of non-objection, the file is to be removed from the [current] records and sent for execution of the judgment.

The Chief Justice of Branch 28 of the Revolutionary Court

Judge for public courts of Tehran

[1] [Article 499:  Anyone who has become a member of the group or gathering and the branches thereof mentioned in Article (498) shall be condemned to three months’ to five years’ imprisonment, unless it is proven that he was unaware of their objectives.]