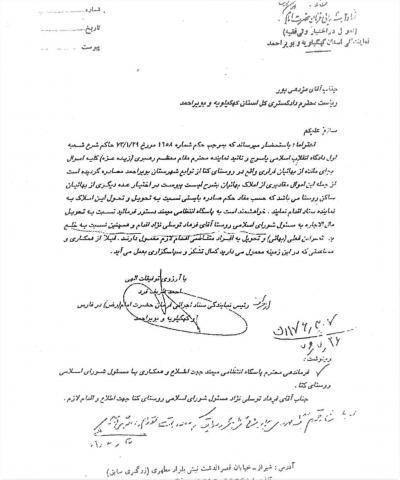 In the Name of God, the Exalted

May blessings of God be upon you

Command Centre for the Execution of Imam’s Orders

(All things belong to the Supreme Leader)

Head of Judiciary in the Province of Kohgiluyeh and Boyer-Ahmad

This is to respectfully notify you that by virtue of court order number 1658, dated 29 Farvardin 1373 [18 April 1994], issued by the Sharia judge of Branch One of the Islamic Revolutionary Court of Yasuj, and approval of the representative of the Honorable Supreme Leader (May His Glory increases by day), all assets belonging to Baha’is who have fled the village of Kata, in the region of Boyer-Ahmad, are expropriated. These assets include certain properties that are currently in the possession of other Baha’is in the village, the list of which is attached. According to the issued verdict, they must make efforts to transfer such properties to the representative of the Command Centre.

With much gratitude in advance for your co-operation and assistance in this matter.

On behalf of the Representative of the Command Centre for the Execution of Imam’s Orders in Fars, Kohgiluyeh and Boyer-Ahmad

[Handwritten note in the middle of the page]

Chief of Police Meymand, for information and cooperation with the person in charge of the Islamic Council of the village of Kata

Mr. Farhad Tavasolinejad, in charge of the Islamic Council of the village of Kata, for information and action

[Handwritten note at the bottom of the page][Illegible]