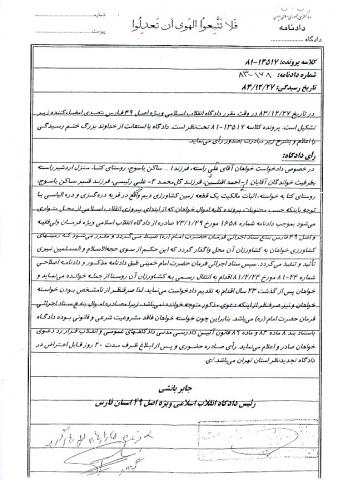 Do not follow your own desires, lest you deviate [Quran 4:135]

On 27 Esfand 1383 [17 March 2005], at a previously scheduled time, the Islamic Revolutionary Court of Justice—Special Division for Article 49, Fars, was convened before the undersigned to review case reference 81–13517. With reliance on the Almighty God, the court concluded the hearing and rendered a decision as follows.

As to the claim of the plaintiff Mr. Ali Rasteh, son of …, resident of Yasuj, village of Kata, home of Ardeshir Rasteh, against the defendants Messrs 1- Ahmad Afshin, son of Gol-Mohammad, 2- Ali Raiesi, son of Ghanbar, resident of Yasuj, village of Kata, with respect to proof of ownership of one piece of rain fed farmland located in the small villages of Darreh Gazi and Darreh Elyasi, the file documents indicate that the entire belongings of the plaintiff—who fled the area soon after the victory of the Islamic Revolution were confiscated by virtue of court order number 1658, dated 29 Farvardin 1373 [18 April 1994], issued by the Islamic Revolutionary Court of Justice—Special Division for the orders of the Supreme Leader and Article 49, Fars, in favour of the Executive Headquarters under the Directive of the Imam (Rest In Peace).  It is noted that the Executive Headquarters then gave the farmlands of the plaintiff to the local farmers as authorized and confirmed by Hojjatol-Islam Nayyeri.  Since then, the Executive Headquarters under the Directive of the Imam Khomeini, through the said court order and further through an amended court order number 81 – 24, dated 24 Ordibehesht 1381 [14 May 2002], has officially distributed and transferred [the lot] to local farmers, including the defendant.  The plaintiff, after 23 years, has submitted this claim.

Notwithstanding that the plaintiff’s claim is unclear, and notwithstanding that his claim cannot be made against the defendant, given that the confiscation of his property has been in favour of the Executive Headquarters under the Directive of the Imam [and not the defendant], the court finds the plaintiff’s claim to be lacking religious and legal credibility and pursuant to section 8 of Article 84, and article 89 of Civil Litigation Procedure Act for Public and Revolutionary Courts of Justice, the court rejects the plaintiff’s claim and issues a court order to this effect.  This court order was issued in the presence of [the plaintiff] and may be appealed within 20 days after its issuance at the Court of Appeal in the Province of Tehran./Y

Chief Justice of the Islamic Revolutionary Court of Justice—Special Division for Article 49, Fars