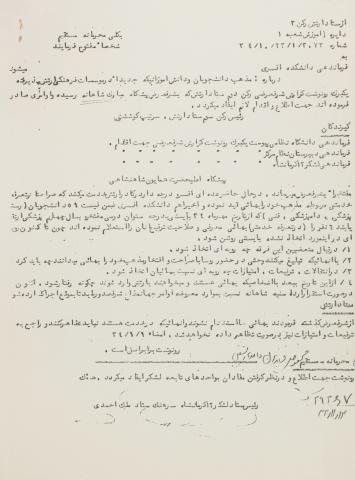 From: Army Headquarters, Third Base

To: Commander of the Military College

[Regarding:] The Religion of the Students and Learners Who Are Recently Accepted at the Army Academic Institutes

A copy of the one-page report of the headquarters of the Army Second Base, which was submitted to His Excellency, the Imperial Majesty [accompanied by] his issued instructions, is submitted herewith for your information and to take the necessary actions:

The Head of the Third Base of Army Headquarters,

The commander of Legion 12 of Kermanshah: Attached one-page copy of the honourable report of His Majesty for action.

To the Threshold of His Excellency, the Imperial Majesty.

I am honoured to inform His Majesty [that] a number of the commissioned and non-commissioned officers are currently serving in the army who have explicitly mentioned their religion in the employment record as “Baha’i”. And recently at the Military College, in the list of 59 students in the fields of medicine, veterinary [science] and technology, who are supposed to be honoured with the rank of second lieutenant and promoted to the fourth year of medicine in Mehr 1334 [October 1955], six individuals in service have been introduced as Baha’is. [The Military College] has enquired about the appropriateness of their promotion. Since no policy in this regard has been devised so far, this matter must be clarified.

His Imperial Majesty, following His Excellency’s wish, may issue decrees in relation to the mentioned points, so that they can be implemented.

Confidential – Directly for the commanders of the independent units

Transcription is identical to its original

The copy is dispatched to the Dependent Legion Units, to inform them and to follow its contents. H:K

Chief of Staff of Legion Headquarters 12 of Kermanshah

Colonel of the Headquarters - Malek Ahmadi