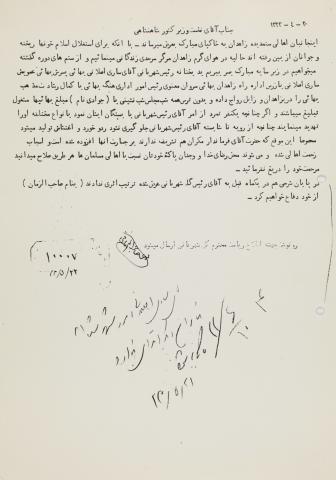 His Excellency, Mr. Prime Minister of the Imperial Country,

We, the oppressed inhabitants of Zahedan, wish to inform Your Excellency that, although much blood has been shed and many youth have lost their lives for the independence of Islam, but now we are living on edge of the country’s borders, in the hot climate of Zahedan. We plead, having endured the oppression of the past, to stay under your blessed protection.

Unfortunately, the head of the police, Mr. Sari Aslani, is Baha’i, his son is Baha’i, his uncle, an inspector of the Department of Roads of Zahedan, is Baha’i, Captain Ma‘navi, the head of administrative affairs of the Army, is Baha’i, and with all bravery and boldness, they have been promoting the Baha’i Faith in both Zahedan and Zabol. Every night without fear they have a get-together with [a person called Javad], who is a Baha’i teacher, and engage in propagating their religion. If someone disobeys the orders of the chief of police or his family, he will be threatened in various ways. If the inappropriate behaviour of the chief of police is not prevented, it will result in clash and disturbances. Particularly at this time, when His Honour the Governor of Mokran is not present, their boldness has increased, which has disturbed the residents.

For the sake of God and your clear conscience, have regard for the Muslim dwellers by any means you deem fit. Kindly do not withhold your mercy.

In conclusion, a month ago, an explanation was given to the director of the police force, who did not pay any attention to it. In the name of Saheboz - Zaman [the Twelfth Imam] we will defend ourselves.