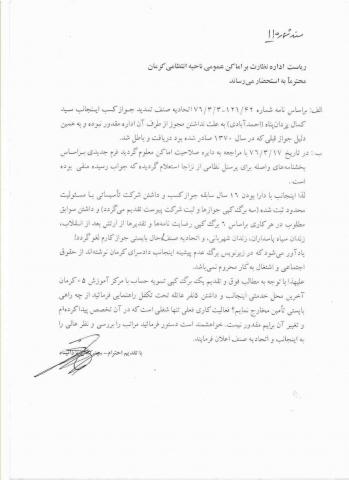 Respectfully, I convey the following:

A: According to letter number 121-42 – 3 Khordad 1376 [24 May 1997] of the Trades Union, renewal of the work permit for me, Seyyed Kamal Yazdanpanah (Ahmadabadi), is not possible due to my not having a permit issued by that Office. It is for this reason that my previous permit, issued in 1370 [1991], was taken away and cancelled.

On 17 Khordad 1376 [7 June 1997], upon visiting the Amaken Endorsement Division, it became clear that based on the circulars received, a new form was required for the approval of the military personnel of NZAJA [Ground Forces of the Islamic Republic], the answer to which has been negative.

Therefore, with 16 years’ history of having a work permit and being the owner of a registered limited company (copies of three pages of the permits and company registration enclosed), and having satisfactory records in all jobs—according to copies of six pages of letters of recommendation and praise by the post-revolution army, Sepah Prison, Police Prison and Trades Union, now I have to suffer the cancellation of my work permit.

I draw to your attention that Kerman Court has written under my background check report that I should not be deprived of social rights and the right to work.

Therefore, considering the above, and in light of a copy of the account settlement with Kerman Training 05 as my last place of service, how am I supposed to provide for a family of five dependants? My current work is my only expertise and changing course is not possible for me. Please order this matter to be investigated and inform me and the Trades Union of your opinion.

Letter from 54 economists to stop economic discrimination against Baha’is

Kamal Yazdanpanah’s letter about his beliefs

Kamal Yazdanpanah no longer has a position in ThyssenKrup

Measures to restrict involvement of Baha’is in many business categories

Refusal to issue business license to Amrollah Manouchehri in Kashan

Dr Jalal Vahdati banned from practicing as Pharmacist in Yazd

Refusal to issue a business licence for professional photography

Derakhshani Pharmacy in Qaemshahr not allowed to operate

Baha'is should not be allowed to run bakeries, dairies, and any other businesses dealing with food as they are unclean

A requirement for getting license to operate a makeup school: applicants must be Muslim or belong to one of the official religions