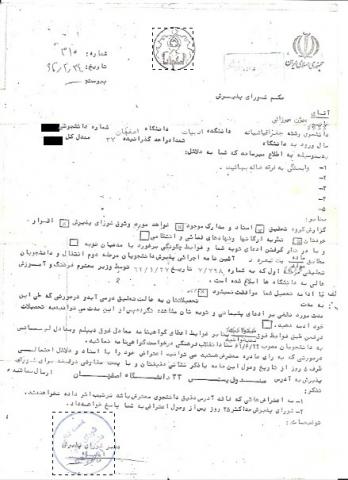 The Islamic Republic of Iran

Decision of the [Student] Admissions Council

We hereby inform you that based on the [following] reason(s)

According to Article 1, Clause D of the Executive By-Laws of Admitting Students at the Second Stage of Transfer and First-time Expelled Students, which were circulated by the esteemed minister of culture and higher education to universities under number 7/798, dated 27/1/1362 [16 April 1983],

In addition, based on the aforementioned policy, you are not allowed to request certification of post-diploma or bachelor’s degree equivalence to students, based on the standards passed on 22/6/1361[13 September 1982] by the Centre for Cultural Revolution.

In case you object to this decision, you can send your objection, along with potential documents and reasons and your exact address, through registered mail to the Admissions Council at P. O. Box 23, the University of Isfahan, within 5 days after receiving this letter.

Secretary of the Admissions Council

Letter of Defenders of the Human Rights Center to the President Rouhani: Do not let Baha’i students be deprived of education