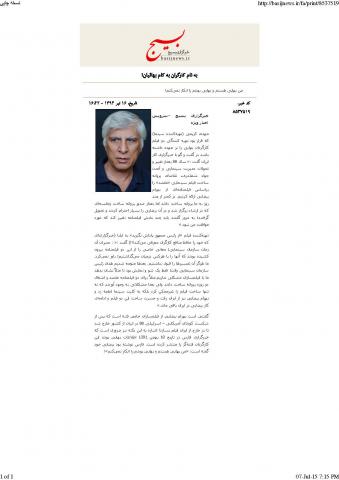 In the Name of Those Who Labour For the Benefit of the Baha’is!

Mehdi Karimi (cinema producer), who was supposed to produce two films directed by a Baha’i, said in an interview with Iran Labour News Agency, “In 1388 [2009], after the changes in cinema management and the arrival of Javad Shamaqdari, we applied for a licence to make the film, “Destination”, based on a screenplay by Bahram Beyzai. Within a few days, they gave us a production licence, but after the issuance of the production licence, a meeting was held in Ershad, [Islamic Culture and Guidance Department] in which Beyzai was highly respected and endorsed, but gradually, they said that some parts of the script should be changed, which I did not agree with.”

The producer of the film, “Do Not Get Rewarded By the President”, said to ILNA (a news agency that claims to be the protector of the workers’ interests!!!), “The directors of the cinema organization at that time had taken certain meanings out of these two scripts that [the people] we shared this with could not believe. We never accepted those interpretations. We later found out that the intention of the head of the cinema organization was just [to put on] a show, a display, to demonstrate that they had no problem with the filmmakers. For example, they furnished licences for two screenplays, “Destination” and “Two-Days’ Occupation”, but later created problems so that not only did producing the film become impossible, but also the entire cinema was damaged. Bahram Beyzai also left Iran, and the regret of making these two films and continuing Beyzai’s work remained in Iran.”

It is worth mentioning that Bahram Beyzai is one of the filmmakers who supported the sedition, who left Iran after the defeat of the American-Israeli coup in 1388 [2009], to make films outside Iran! It is also necessary to point out that on 18 Bahman 1391 [6 February 2013], Fars News Agency published the information that this seditionist director was a Baha’i. Fars wrote that Beyzai had said, “I am a Baha’i and do not deny that I am a Baha’i”!