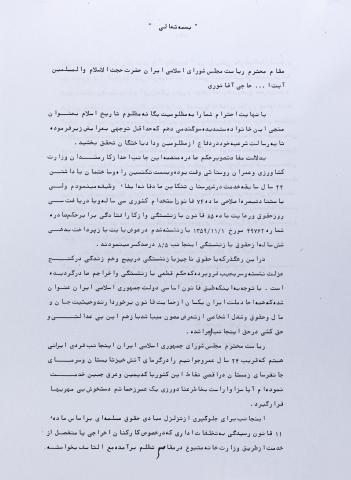 Respectfully, I entreat you by the wrongs suffered by the single greatest oppressed one in the history of Islam, to intercede as the saviour of this oppressed family, and turn your attention to the following plea, thereby fulfilling your religious duty to defend the oppressed and the deprived from injustice.

As indicated in the enclosed order, I, the undersigned, have been an employee of the Ministry of Agriculture and Rural Development of the government of the time, where I served for 24 years with uprightness and honour as a civil engineering technician in Tonekabon.  Subsequently, based on the amended note to Article 74 of the State Employment Act, [with] 30 years [of service] and receipt of 30 days’ salary, and in accordance with Article 85 of the Retirement and Disability Law, as per order number 49762, dated 1 Bahman 1359 [21 January 1981], I was retired, whereby in lieu of the 6 years owing, 8.5% was deducted from my pension.

During this period, as I was struggling to manage the ups and downs of life with the insufficient retirement pension, an order was issued for my dismissal and the termination of my pension. Despite the assurance in the provisions of the Constitution of the Islamic Republic of Iran, which stipulates that all citizens are equally protected under the law, and that the life, property, rights, and occupations of individuals are safeguarded from violation, why I was subjected to this unfair and unjust treatment?

Honourable Speaker of the Islamic Consultative Assembly of Iran, I am an Iranian citizen who spent 24 years of my life and youth serving to the best of my ability in the far-flung corners of this country in the scorching heat of the summer and the freezing cold of the winter.  Is it fair that a lifetime of effort be subjected to hostilities and laid waste in this manner?

In order to prevent the shattering of the foundations of the basic [human] rights, I appealed my case through the relevant Ministry in accordance with Article 11 of the Administrative Violations Review Act concerning [wrongfully] dismissed or severed employees. Unfortunately, however, my rightful and legitimate plea that should have been considered favourably and attended to under civil law and Sharia law was denied.

No doubt you can appreciate the distress caused by undue financial pressure arising from the exorbitant cost of living and inflation, without the prospect of having an income. In consideration of the above explanation, and the promises made by statesmen of the Islamic Republic, who claimed, and continue to claim, that [government] organizations function according to the Islamic ways, and that they will hasten to attend to the cases of the afflicted and the outcast who are driven to secure their human rights—by virtue of which the crown of the Islamic Republic was adorned, [I hereby plead to you that] my family and I are human beings in need of protection. In hopes of your compassion, I stretch my pleading hands out to you, and beseech you – appealing fervently to your sense of altruism as well as the kindness and affection that is an aspect of the social instinct of man – to arrange for this 60-year-old former worker and his family the reinstatement of my pension so as to carry me through the last years of my life under the protection of the government of the Islamic Republic.

Kindly respond to me at the following address:

Three doctors support their Baha'i colleague, whose license to practice is cancelled

Bahram Nabi-Elahi's request to have his pension reinstated

Letter by Navid Roshanabadi, nine-years old, to the President

Letter from Baha’i community of Kermanshah to Prime Minister: Stop persecution of Baha’is

Appeal for justice to President Khamenei