Bahar-e No newspaper: Trial in Shahroud 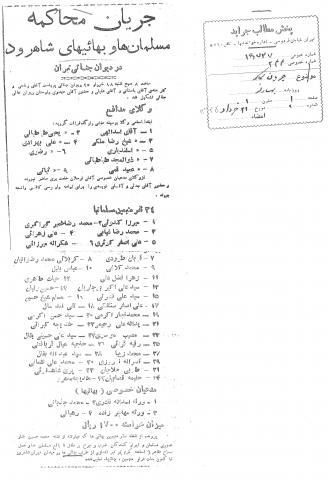 On Saturday, 18 Khordad 1325 [8 June 1946] at 8:00 a.m., the Criminal Court was convened under the supervision of Mr. [Justice] Refahi, the officers of the court, Mr. Bastani and Mr. Aghili, and in the presence of the prosecutor of the Supreme Criminal Court, Mr. Mahdavi.

At first, the name of the names of the lawyers were read by the secretary of the court, as follows:

Mr. Khalatbari, the private lawyer for the complainants, was not present; they [the complainants] had considered the presence of Mr. Jadali and Mr. Navidi sufficient to carry out the trial.

The [thirty-four] Muslims who were accused were:

The private complainants (the Baha’is):

The criminal file of the accused Baha’is, that consists of the murdered Mohammad Hasan Ghannad Amoudi Muslim, and attackers and injurers of the minor child of Muslims, carrying a dangerous weapon and shooting by Baha’is in Tehran Square of Shahroud, is still to be prosecuted, as the accused Baha’is are still at large.

Indictment of the Baha’is of Hamedan

Collaboration with Savak and Pahlavi Regime

Ettelaat newspaper: The case of Baha’i killings in Yazd

Trial of defendants accused of murdering Baha'is in Shahroud

Finance Minister reports disturbances in Shahroud, in which four people have been killed, including Head of the Tobacco Company, Asadollah Naderi

Letter by Fatemeh Naderi about the murder of her son in Shahroud, forwarded to Justice Department

Fatemeh Naderi complains to Prime Minister about the murder of her son, Assadollah Naderi

Indictment against 15 Baha'is in Yazd