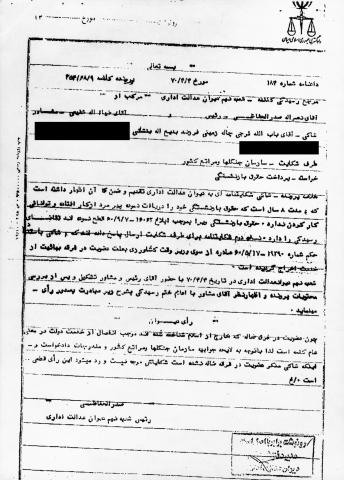 The Judiciary of the Islamic Republic of Iran

Investigation Authority –Branch 9 of the Court of Administrative Justice

Procedural Synopsis – the Applicant submitted a letter of complaint to the Court of Administrative Justice, in which he stated that he had not been receiving his retirement pension for the last eight years.  He is an old, disabled man, who is not able to work.  His pension was cut off according to Order 16062 – 7/9/1360 [28 November 1981].  He requested a review.  A second copy of the letter of complaint was sent to the Respondent. They replied that the Applicant had been dismissed by virtue of Order number 19290 – 17/5/1360 [8 August 1981], issued on behalf of the agriculture minister of the time, for membership in Baha’i sect.

Branch 9 of the Court of Administrative Justice convened on 4/4/1370 [25 June 1991] with the presence of the chief justice and consultant.  Following the review of the contents of the file, and [after] the consultant’s view had been heard, the meeting adjourned, and the following decisions were announced.

Membership in perverse sects which are known to be outside of Islam is generally [valid] grounds for dismissal from government employment; therefore, considering the responding statement of the State Forests and Rangeland Organization, the content of the statement of claim, and the fact that the Applicant does not deny his membership in the perverse sect, his complaint is not acceptable and is refused.  This decision is final.

Chief Justice of Branch 9 of the Court of Administrative Justice