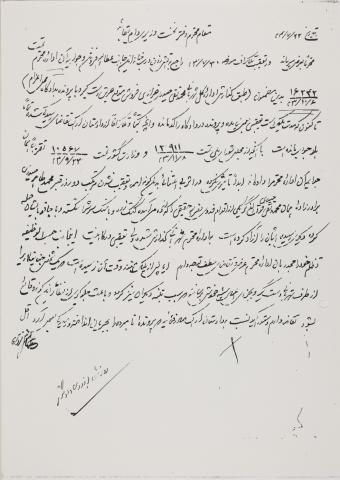 Esteemed Office of the Prime Minister, may he live long

I, Ataollah Foroutan, wish to respectfully submit that, further to the telegraph dated 30 Mehr 1323 [22 October 1944], about burning the entrance door to my property, [I received] a response from that respected office, under number 16242 of 6 Bahman 1323 [26 January 1945], indicating that, “According to the police headquarters report, Mohammad-Taqi Heydari, who is a haberdasher, was arrested during the arson and was sent to court, together with the case file.” Since then, almost a year has passed and there has been no follow-up action and the case has been resting idle at the court. All the written and telegraphed requests to the public prosecutor of Arak have remained unanswered.

Although the National Consultative Assembly, in communication number 13911, dated 23 Bahman 1323 [12 February 1945], and the Ministry of the Interior, in communication number 10567, dated 23 Azar 1323 [14 December 1944] gave the same response as your respected office, yet it has not had any positive effect on the case. As a result of ignoring such cases and refraining from prosecuting the perpetrator, two days ago, Mohammad-Tahir Heydari, the nephew of the above-mentioned Mohammad-Taqi Heydari, assaulted with a knife, beat up and [fractured the skull] of Nasrollah Haghighi, who is one of my close relatives, and who has been coming to the village. A passer-by reached out and rescued him. This matter has been reported to the police headquarters, but there has been no prosecution of the case.

Herewith, as my duty, I again submit my objections in this regard to your respected office, hoping to gain your attention regarding this matter. After one year, is it not time that the police detained, prosecuted and punished a criminal for his evil-doings, thereby teaching a lesson to other criminals and preventing similar incidents in the future?

I am pleading with you to issue firm orders to the public prosecutor of Arak to prosecute the case of the mentioned individual and to take action in this regard.

[Handwritten note:] Copy to the Ministry of Justice