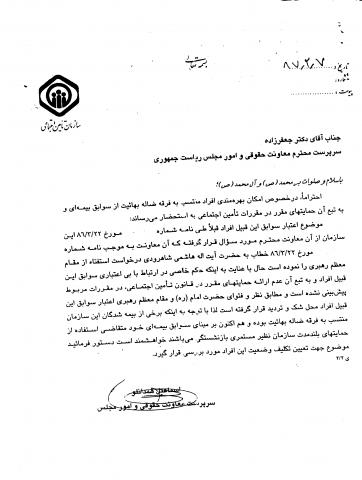 In the name of God

Salutations and greetings upon Muhammad (PBUH) and His kin;

Respectfully, in regard to the issue of entitlement of individuals affiliated with the perverse Baha’i sect to insurance benefits and, consequently, having access to social welfare, as defined in the Act, the following is conveyed:

On a previous occasion, guidance was sought from your respected Office on the validity of the records of such individuals through letter number -----, dated 22 Khordad 1386 [12 June 2007]. Subsequently, your respected Office, through letter number -----, dated 22 Khordad 1386 [12 June 2007], addressed to Ayatollah Hashemi Shahroudi, requested guidance from the respected Supreme Leader. Now, considering that no specific decree regarding any lack of credibility of such individuals has been found, no provisions have been made in the Social Welfare Act regarding rejection of their benefits. However, according to the fatwa of Imam [Khomeini] (PBUH) and that of the respected Supreme Leader, the credibility of the records of this group of individuals has been questioned; therefore, given that a number of individuals insured with this organization belong to the perverse Baha’i sect and are now, on the basis of their insurance records, applying for long-term benefits, i.e., pension benefits, your guidance is requested in order to clarify the assessment and provision to determine the status of such individuals.

Deputy for Legal and Parliamentary Affairs

Written contract for management of the public bath in Ivel