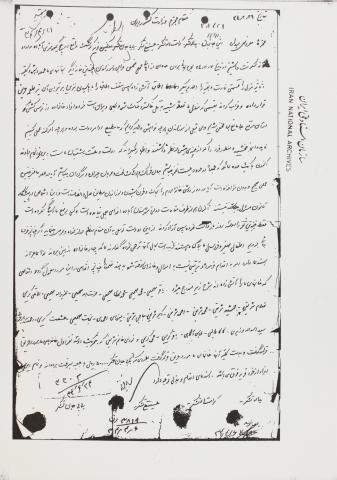 The Respected Minister of the Interior – Iran

On 7 Khordad 1334 [29 May 1955], several residents of the village attacked our homes, as well as several other houses, owing to our being Baha’is. While they had already destroyed and burned other Baha’i houses, they attacked our homes, ransacked and took all our belongings and furniture, and finally, by sprinkling gasoline on the doors and roofs, burnt to ashes the entire houses and whatever was left therein. Currently, our houses have turned into hills of ash and dust, and are completely destroyed. We have hidden ourselves, out of the fear of losing our lives or being assassinated, which at the time looked quite probable.

Although, before the burning of our houses, we earnestly pleaded with them and requested them not to destroy everything, and told them, “We are law-abiding people and obey the government, and follow the country’s law,” they did not listen to our pleas and it did not affect them. They implemented what they had planned a while ago and told us, “People and government are our supporters”.

We are twenty people; left with no food or clothing, empty-handed and homeless, and are currently wanderers. Are such actions justified in this day and age? Should the perpetrators not be reprimanded and brought to justice? Do you consider it fair that someone burns and destroys another person’s home to ashes in the daylight? According to the law, should these people not be accountable [for what they did] or receive justice?

The government authorities in Abadeh have not yet either verified our situation or taken any action. They only arrested a few people and released them after two or three days! Therefore, we are appealing to you and saying, “Although you may blame us for being Baha’is, our little children are innocents! They merit your compassion. Do not allow that members of four families suffer and vanish. We earnestly request you to take action now and put some measures in place for our support, as our homes are [completely] destroyed.

It was with the provocations of the first two or three [individuals in the list] that our homes were set on fire. They also stole a box containing 50,000 rials that belonged to Bibi Khánum Tashakkor. All of them came from our same village.

We are pleading with you and looking for your action and attention.