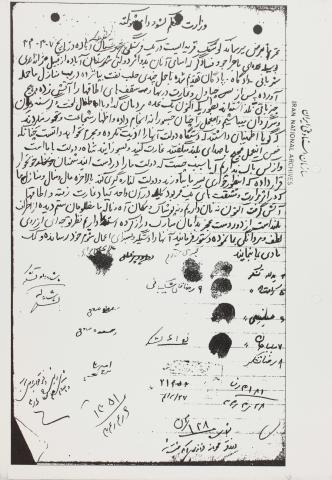 The Ministry of the Interior

I would like to cordially convey that Koushkak is a village, situated approximately one parasang[1] away from Abadeh.On 7 Khordad 1334 [29 May 1955], some adventurous thugs and hooligans, whose names we have sent to government authorities at the gendarmerie and police force and court, attacked the doors of our houses, and after looting and ransacking everything, burned the doors and the roofs with kerosene to ashes and did not leave anything behind. Now we are a group of homeless people, stripped of everything, hungry, with small and young children wandering around.

They did all these things with such brutality, assured of the government’s protection, and believing that they would never be punished for the crimes they were committing. [While] burning, looting and committing these tragic actions, they were shouting, “Loot!” “Burn the shah!” and “Government are with us and we are not afraid of anyone.” Why has the government left us in the hands of these blood-thirsty enemies, who humiliate us in such a manner, and why has the government flinched from its responsibility? What we lost in an instant of looting and fire was the result of a lifetime’s hard work and hardship.

We have no food nor livelihood, neither clothing nor a shelter. We are lamenting everywhere and are pleading to you for help. We are supplicating you that out of justice [you will] pay attention to us and order prosecution, arrest and punishment of those responsible for such heinous acts, and assist us financially.

Report of investigation into disturbances in Shahroud

Mob attack and murder of Bahai's in Shahroud

Threat against Baha'is in Damghan