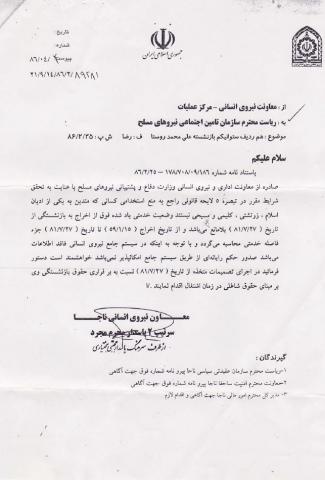 Police Forces of the Islamic Republic of Iran

To:  The Honourable Chief of Social Security of the Armed Forces Organization

Issued by the Administrative and Human Resources Assistant of the Ministry of Defence and Support to the Armed Forces, in light of compliance with the agreed conditions in Note 5 of the legal bill concerning prohibition on employing individuals who are not believers in one of the [officially recognized] religions:  Islam, Zoroastrian, Judaism, and Christianity:  there is no objection to transferring his aforementioned service status from expulsion to retirement from (27 Mehr 1381 [19 October 2002]).  The period from the date of expulsion (15 Farvardin 1359 [4 April 1980]) until (27 Mehr 1381 [19 October 2002]) is regarded as a service gap.  In view of the lack of information in the human resources system, the issuance of an on-line ruling through the computerised system is not possible.  You are directed to issue the necessary instructions for the agreed decision of (27 Mehr 1381 [19 October 2002]) to reinstate the retirement pension of the above-mentioned person based on his working salary while employed, to be implemented.

[1] [Acronym: The Police Force of Islamic Republic of Iran]

[2] [Acronym: Office of Security of Information]