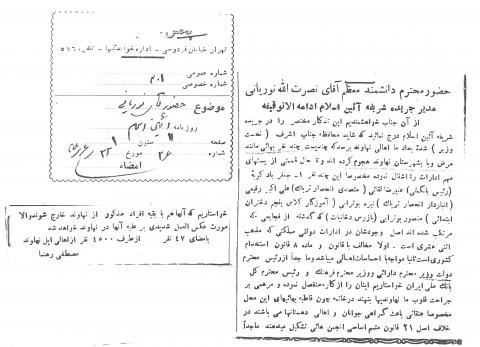 We, the local residents of Nahavand, are asking your eminence to publish this short notice in the respected newspaper of Aein-e Eslam, that perhaps a protector like the Honourable Mr. Prime Minister, will pay attention to our appeal. For some time, a few Baha’is, like a plague disease, have attacked the City of Nahavand, and, so far, have taken some important positions in the departments; especially these individuals: [1]-Jafar Badkoubei (head of the Bank Melli), [2]- Ali-Reza Laghaie (manager of the State Opium Monopoly), [3]-Ali-Akbar Rafiei (warehouse-keeper for the State Opium Monopoly), [4]-Nayyereh Boutorabi (teacher of grade five at girls’ primary school), [5]-Mansour Boutorabi (inspector of the Tobacco Company),

Besides committing so many disasters, the fact of their existence in the government departments of a country whose sect is Shi’a, is, firstly, against Article 8 of the Public Services Employment Act, and secondly, it provokes the residents’ feelings.

In conclusion, as the majority of the Baha’is here, especially Anghaei, are misleading the youth and the residents of the villages, which is contrary to supplementary clause to Article 21 of the Constitution, we emphatically request that they, with the rest of those mentioned, leave Nahavand. Otherwise, harsh consequences against them will occur in Nahavand.

With 47 signatures on behalf of 4,500 residents of the Nahavand Tribe

letter published in "Aein-e Eslam" newspaper protesting that Zoroastrians, Jews and Baha'is are allowed to be employed as school teachers